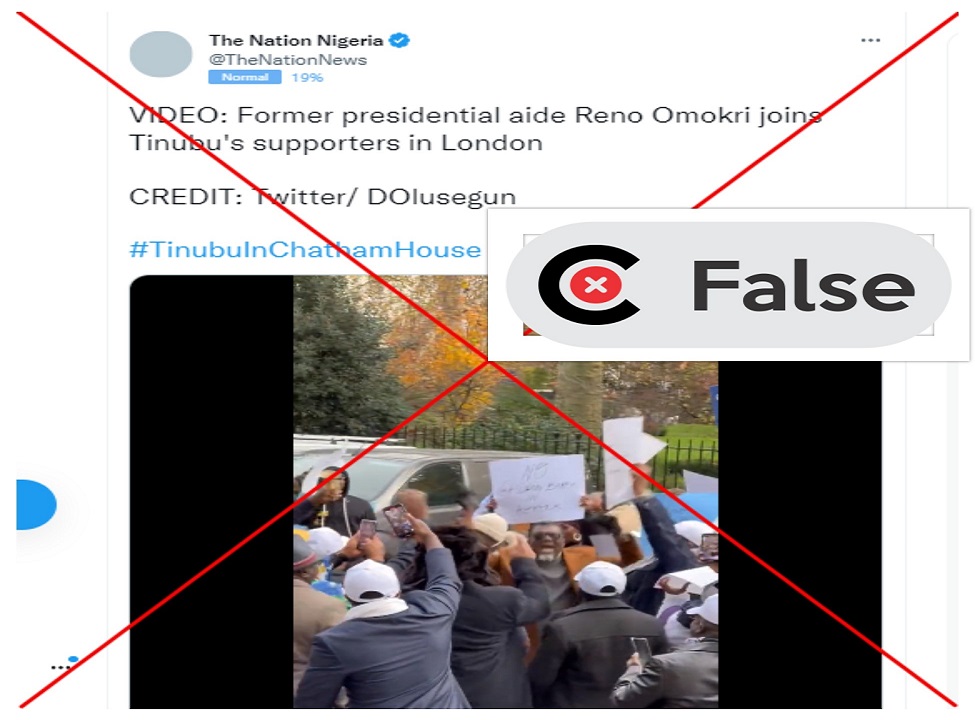 Screenshot of The Nation newspaper's tweeted video (with the false claim) showing Reno Omokri amidst the protests in London on Monday.

ON Monday, December 5, 2022, a viral video shared by The Nation Newspaper claimed that a former presidential aide to Goodluck Jonathan, Reno Omokri, was campaigning in support of Bola Ahmed Tinubu, the All Progressives Congress (APC) presidential candidate for Nigeria’s 2023 election.

Omokri is a staunch supporter and member of the Peoples Democratic Party (PDP).

The 25-second footage appeared on the heel of Tinubu’s appearance at the Chatham House in the United Kingdom.

The APC candidate had visited, alongside his loyalists, including the Governor of Kaduna State, Mallam Nasir El-Rufai, to deliver a lecture on security, economy and foreign policy ahead of next year’s poll.

Tinubu, a two-term former Governor of Lagos State, also utilised the platform to speak on his vision, policies and personal issues, such as his actual age, which had been under contention.

As of the time of filing this report at 6:00PM on Monday, the video post has garnered over 8,400 views and multiple reactions.

While netizens expressed confusion over the post, others who appeared as APC supporters described the politician (Omokri) as “a fan of Tinubu, you can’t tell me otherwise”.

Findings by The FactCheckHub show the claim is FALSE.

The Chatham House is an independent policy institute headquartered in London. The group, also recognised as the Royal Institute of International Affairs, has become a place most presidential political candidates visit to showcase their agenda, especially as they get close to the election period.

A former Nigerian Vice President, Atiku Abubakar, was at the Chatham House in April 2018.

Meanwhile, an analysis of the video showed that contrary to the claim, Reno was actually using derogatory words against Tinubu in a protest at the same location (Chatham House).

Research showed that there were two camps around the Chatham House, a camp loyal to Tinubu, and Reno’s Camp (who were protesting against Tinubu’s candidacy).

They chanted demonstration songs amid the protests, findings revealed.

In a separate video of about 39 seconds from the same location, Omokri and his team yelled in Yoruba language – ‘Tinubu Ole’, literally translated to mean “Tinubu is a thief” in English.

However, due to the rival groups’ proximity in the controversial footage, pro-Tinubu supporters rather ended Omokri’s chanting with “Tinubu for president” as the two protesting groups shout.

As of when the claim was made, Omokri’s pinned tweet showed that the PDP supporter was demonstrating against the APC presidential candidate, which was also validated by a-52-second video.

Thus, contrary to the claim, photographs, placards and videos from the same incident revealed that Reno was protesting against Tinubu at the said location and not in support. The claim is, therefore, FALSE.