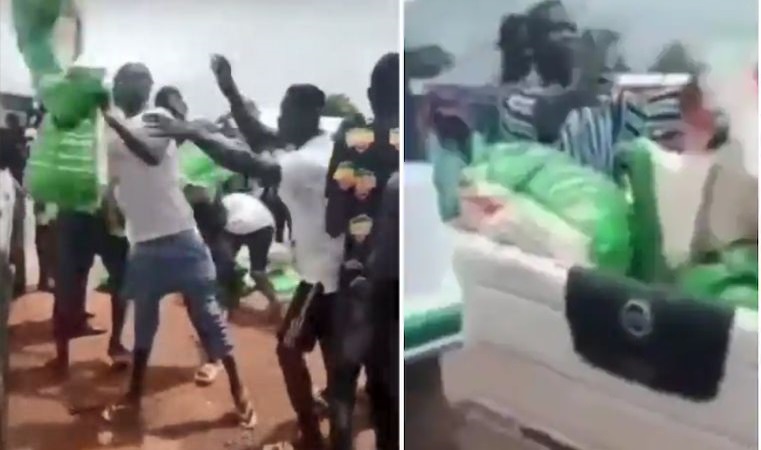 Screenshots: Ghanaian youth return rice given to them by a politician,
Reading Time: 2 minutes

A video circulating on social media claims some Ghanaian youths rejected bags of rice donated by one of the country’s politicians and asked for jobs instead.

The post was screenshot by The FactCheckHub on Tuesday 20 July, 2021 via WhatsApp.

In the widely shared WhatsApp post, it states that the youths demanded jobs, improved standard of living instead of rice.

“Can Nigerian youths ever emulate them and reject N5,000 given to them by politicians during elections?” the quote reads.

It was also shared by a former Nigerian lawmaker, Dino Melaye, on his Instagram.

Meanwhile, the claim was also shared on Facebook and other online news platforms.

A search through Ghanaian media organisations revealed the incident occurred in a location known as Busunu in West Gonja Municipality.

The municipal is under the Savannah district and its capital is Damongo. The incident was reported on 20 July 2021. Youths from the community rejected bags of rice sent to them by the federal lawmaker representing Damongo Constituency, Samuel ABU Jinapor.

The youths were led by a teacher identified as Gbelo, the report on My Joy online stated.

The media platform is one of the multiple media organisations owned by The Multimedia Group, established in 1995.

“The era of promise and fail by politicians and political parties in Busunu is over. We didn’t ask you to give us rice, you promised us jobs and not rice and we have gone beyond the rice,” the youth chanted.

Reports say the food gift was for the Eid-el-Adha celebration among Muslims in his constituent in Ghana.

The BBC also reported the incident.

Independent findings show that the lawmaker is a lawyer and also a member of the New Patriotic Party (NPP). The lawmaker had earlier promised the youth jobs during the election period which brought him to office.

Based on multiple verifiable evidence, the claim that some Ghanaian youths rejected bags of rice from their lawmaker is TRUE.

Niprimune is not a treatment, cure for COVID-19