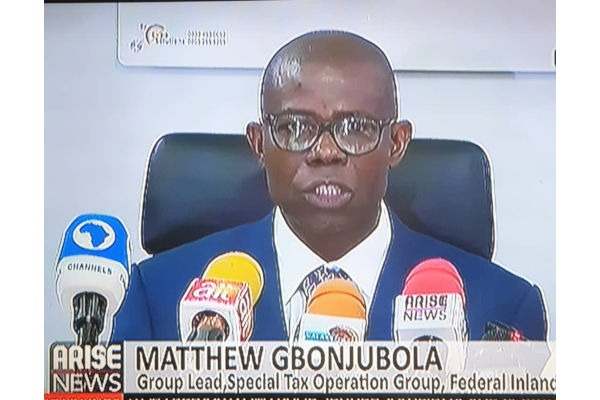 A screenshot of the briefing where FIRS official, Mathew Gbonjubola made the claim.
Reading Time: 3 minutes

LEAD of the Special Tax Operations Group at the Federal Inland Revenue Service  (FIRS) Mathew Gbonjubola claimed that there was nowhere in the world, where the administration of Value Added Tax was done at the sub-national level, but checks by The ICIR have shown this claim to be false.

Gbonjubola made this claim on Wednesday at a press briefing in Abuja while defending reasons why FIRS, a federal agency, could not devolve powers to collect VAT to Nigeria’s 36 states.

“It is extremely difficult, if not impossible, to operate VAT at the sub-national level,” he declared.

To drive home his point, he added, “…That is why there is no country in the world that does that.”

The ICIR has checked the administration of tax in other jurisdictions and found countries where value-added taxes are collected at the subnational level contrary to the claim of the FIRS officer.

One of such countries is India where states operate different VAT rules and implementation guidelines. An Indian company with a turnover of more than Rs.5 lakh is required to register and file for VAT at the state where it operates.

Similarly, VAT, locally referred to as sale tax, is levied at 17 per cent in Pakistan by four provinces: Sindh, Balochistan, Khyber Pakhtunkhwa, and Punjab, and not by the federal authorities.

In fact, rates in other provinces and cities are lower. For example, the Capital Territory of Islamabad, as well as Gilgit-Baltistan, Kashmir, and Azad Jammu, charge different rates of VAT on their goods and services ranging between 13 and 16 per cent.

Brazil, the largest federation in South and Latin America, has two kinds of VATs. One is a state sales tax (Imposto sobre Circulação de Mercadorias e Serviços – ICMS) and the other is a federal excise tax (imposto sobre produtos industrializados – I PI). And the rate of VAT varies from one state to the other.

While Rio de Janeiro charges 19 per cent VAT, states such as Santa Catarina, Espírito Santo, Alagoas and others collect their VAT at 17 per cent rate. States such as Bahia, São Paulo, Sergipe and 11 others charge 18 per cent VAT.

A check of the tax administration system in Canada also reveals that sales taxes are collected at both federal and provincial levels.

The tax collection system in Canada is harmonised in a way that while the federal government collects 5 per cent of sales tax, the provincial governments collect 8 per cent. And some provinces collect as much as 10 per cent in sale tax.

As for the goods and service tax, most businesses collect the tax at the point of sale and then remit the tax to the Canada Revenue Agency (CRA) on behalf of the federating units.

The United States from which Nigeria borrows several of its laws does not collect VAT. The federal government collects income tax, while the states and local governments collect sales taxes and property tax respectively.

In European Union, member states agree to individually collect a minimum of 15 per cent VAT rate, which may be lower for some goods and services.

Therefore, tax administration varies from one EU country to the other. In fact, Switzerland has its own VAT rates, separate from the European Union rate.

These examples have shown that the information shared with the Nigerians by the FIRS official at the press conference on Wednesday was false.

Notwithstanding, The ICR finds that value-added taxes are collected by federal authorities in countries such as Russian Federation, Malaysia and Mexico.

FIRS and state governments such as Lagos and Rivers currently have been at loggerheads regarding who has the legal power to collect VAT.

So far, FIRS is on the wrong side of the law.

This report was  republished from the International Centre for Investigative Reporting.

Video does NOT show Christians wrapped in plastic bags in Afghanistan

Are SIM cards made in Nigeria?