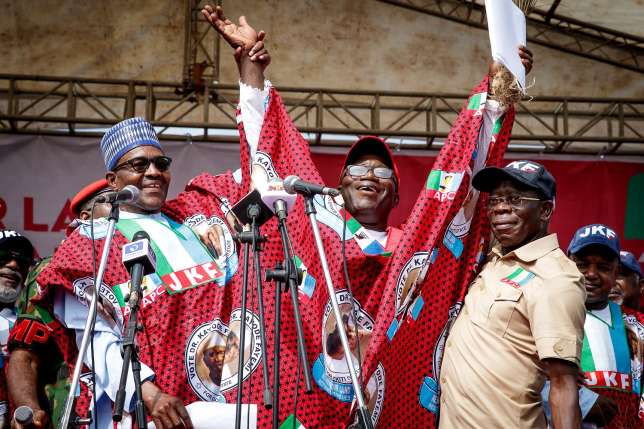 THE mega rally of the All Progressive Congress (APC) on Tuesday ahead of the Saturday’s governorship election in Ekiti State presented an opportunity not only to praise the party’s candidate but also to write off the opposition.

One of those who passionately seized this opportunity was Adams Oshiomhole, newly elected APC National Chairman. He said he made efforts to read books, published works and the PhD thesis written by Kolapo Olubunmi Olusola, the PDP governorship candidate, but was unable to find any of those documents.

He further questioned the legitimacy of Olusola’s professorship based on his findings.

“I understand the one they are bringing, they said he is a professor,” Oshiomhole said.

“So I went to the library and I was looking for any of the books that he may have written, because to be a professor you are supposed to have published a lot of materials. I wanted to read any of the books written by this professor so that I can gauge how his mind works.

“But then, when I couldn’t find, I asked the librarian, this candidate who wants to contest with Dr Fayemi, where are his published works, I want to see his PhD thesis so that I can evaluate it and it will give me a window into his heart. There is none. I say none.”

“Se ti iwo o ba ko iwe, bawo ni iwo se je professor,” he added using a Yoruba expression, which translates in English as: if you did not write a book, how then did you become a professor.

However, is it true as the APC chieftain strongly suggested that Olusola does not have any books or academic papers written by him or accessible to the general public?

A simple search by the ICIR on Google Scholar, a freely accessible web search engine that indexes a wide range of academic literature, revealed that Kolapo Olusola has an exclusive profile page.

His works have been cited in 390 places. The vast majority of indexed academic papers are, however, either authored only by him or in conjunction with other researchers.

Also according to the Google application, his unpublished PhD thesis―with the topic: Factors affecting compressive strength and elastic properties of lateriased concrete―has been cited up to 21 times, including in this paper: Determining the Properties of Green Laterized Concrete with
Fly Ash for Sustainable Solid Waste Management.

Twice on Wednesday, the ICIR reporter visited the OAU Department of Building to confirm the submission and availability of Olusola’s PhD thesis. However, the departmental secretary, with access to the theses, requested the reporter to come the following day. On Thursday, there was no official available to attend to the ICIR’s request.

HIS BOOK ON AMAZON

Additionally, Olusola’s scholarly works have been featured on Amazon, the world’s largest electronic commerce company. A book, which he co-authored with Babatunde Olawuyi, Volcanic Ash Blended Cement Laterized Concrete, is listed for sale on the platform. It was published in 2017 and costs $49.

It is false – as the APC National Chairman suggested – that Olusola has not written any books, research papers or PhD thesis. While it is possible the library he visited does not contain any of such works, a simple web search is all that is needed for Oshiomhole to have an idea about the PDP aspirant’s scholarly works.

FACT CHECK: Can the GCFR national honour be awarded posthumously?

FACT CHECK: Was the Nigeria Air logo designed by a Bahraini company? Yes