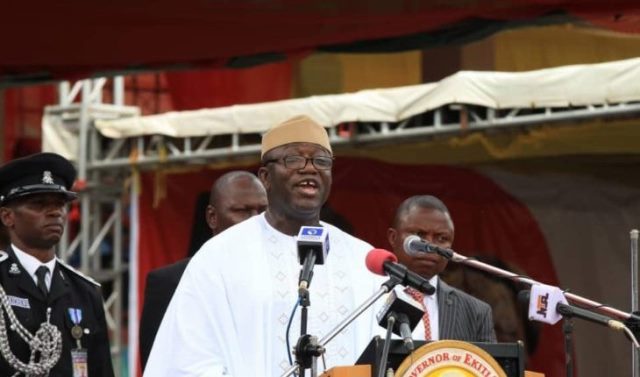 ACCUSATIONS of debts profile in Ekiti State have become a vicious cycle between the incumbent governor, Kayode Fayemi and his predecessor, Ayodele Fayose.

They both have released many figures−huge and contradicting debt profiles that have left the public confused in their determined efforts to run down and malign each other. This has been since 2014 when Kayode Fayemi lost to Ayodele Fayose in a hotly contested election.

When  Fayose took over from Fayemi in October 2014; he accused the later of plunging the state into debts that outlived his administration.

Then, Fayose alleged that his predecessor left a debt profile of N45 billion and later came up with another figure of N86 billion which he said the state would only be able to exit in 22 years− 2036.

Now, the tide has turned and new debt profile has been released by the new government− it is both outrageous and controversial.

On Tuesday, October 16, 2018 when he was reading his inaugural speech at his swearing-in ceremony, Governor Kayode Fayemi said available evidences suggested that the state has been plunged into debts that amount to N170billion.

He vowed to probe his predecessor’s finances to ensure that the culture of prudence and financial propriety were brought to bear in the governance of the state.

“We will ensure that within 100 days from today, Ekiti Kete will know the true position of things,” Fayemi said, alleging that the loans that accrued to the N170billion debt was expended on white elephant projects.

He would later reverse himself that the debt profile was indeed N120billion and not N170billion as earlier claimed.

The newly appointed Chief Press Secretary to the governor, Olayinka Oyebode,  in a statement revealed that the state’s indebtedness is now N120 billion.

According to a copy of the debt profile Oyebode made available to The ICIR, which he said the government of Fayose prepared and sent to the DMO, the debt profile was N120billion as of June 2018.

He stressed that the figures could have also increased from June when it was prepared and submitted to the DMO.

“The document was sent prepared by the immediate past administration in June this year, so the indebtedness could have increased between June and now,” he said.

“The truth about the actual financial records of Ekiti State is now in the open going by the debt figures voluntarily submitted to statutory regulators, the Debt Management Office by the outgoing government of Governor Peter Ayodele Fayose in Ekiti State,” he said.

“Contrary to repeated claims by the Fayose Administration that Fayemi plunged the state into a debt burden that will not be paid off till 2036, it is now clear than the bond taken by the Fayemi administration is almost completely paid off with the first tranche of N20bn to be completed in October 2018 and the second tranche of N5bn bond due for payment in 2020.

“The report revealed that the domestic debt of Ekiti State leapfrogged by N3bn within the last three months from N117bn to N120bn between March and June 2018 making Ekiti state debt to quadruple since Fayose assumed office as the Governor in Ekiti State from N31bn in 2014 to N120billion.

But the immediate former governor refuted the N170billion debt profile claim by Fayemi arguing that the state’s debt profile left by him was not more than N60 billion. This rebuttal also negates the claim of the N120billion and the possibility of any veracity in the document sighted by the new government at the DMO.

Fayose who is currently in the custody of the Economic and Financial Crimes Commission (EFCC) for interrogation over allegation of fraud, responded through his media aide, Lere Olayinka, that the debt was either directly incurred during Fayemi’s first tenure or as a result of the loans restructuring done at the instance of the federal government and the Federal Economic Council.

On December 17, 2017, Daily Post, an online newspaper reported that the Debt Management Office (DMO) release a bulletin that showed that Fayose borrowed a total of N56billion since October 2014 when he came to power and December 2016.

The newspaper gave the breakdown, as follows, quoting the DMO bulletin which it claimed was available on the agency’s website.

It added that the figures excluded another N25billion applied for which was waiting approval.

The bulletin and the figures could not be traced by The ICIR on the DMO website.

In a swift reaction, Fayose denied that the state under him in three years borrowed N56 billion.

“The only fresh loan taken by the government of Fayose was the N10 billion grant from the Excess Crude Account, which was released to all states for capital projects, N2.8 billion requested from Wema Bank to pay State Universal Basic Education Board (SUBEB) counterpart fund out of which N1 billion has been accessed and N600 million for MDGs counterpart fund, which has been repaid,” he said in a statement issued by Lere Olayinka.

Fayose accused Fayemi of orchestrating the report that was attributed to the DMO, but insisted that he inherited N86billion debt when he came to power in October 2014.  This claim was also not available on DMO’s website.

But DMO figures show that Ekiti was only indebted to the tune of N38billion −both domestic and foreign debts as of December 2014, two months after the exit of Fayemi as the state governor.

Despite all these discrepancies in figures being churned out by the two parties to the public domain, figures of Ekiti State Debt profile contained on the official website of the Debt Management Office (DMO) may have laid the controversy to rest.

As of December 2014, two months after Fayose took over from Fayemi as the Governor of the state, Ekiti State domestic debt profile stood at N30.5billion while its foreign debt was $46.5million. This amounted to N38billion when the foreign debt was converted to naira at the exchange rate of N168 per dollar.

Therefore, the debt profile of Ekiti State, both local and foreign when Fayose took over from his predecessor in 2014 was N38.26billion and neither N45 billion nor N86 billion that he said the state would exit in 2036. It was also not N18billion claimed by the Daily Post.

It must be noted that debt profile of each state on DMO website was calculated as of December of each year except for 2018 that has not ended and which the agency has released the figure up till June.

The DMO, on its website, did not provide details of how these debts were incurred.

The state’s debt profile as of June 2018

And until there is another official release by the agency, this is what could be seen as official debt profile of the state and not N170billion or N120billion.