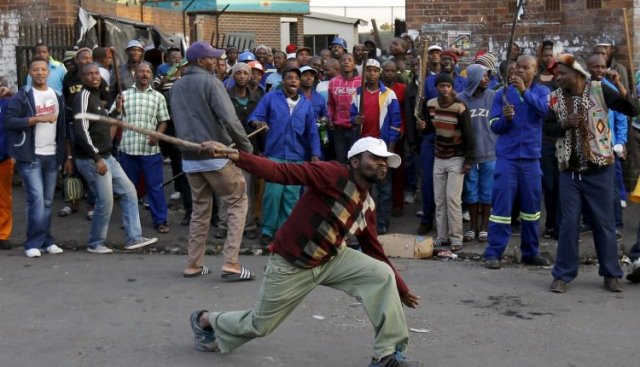 PICTURES from the general elections conducted four years ago and 2015 xenophobic attacks in South Africa have been recently shared in support of claims about violence in Kogi and Bayelsa gubernatorial elections, The ICIR has observed.

A report by The Nigerian News, a “citizen’s online publishing and broadcasting platform”, shared on Tuesday made use of a suspicious picture to illustrate alleged thug attacks in Kogi State. (Archived here.)

“Ahead of Kogi November 16th election, the governorship candidate of the Social Democratic Party (SDP), Natasha Akpoti, and his campaign team have been allegedly beaten up by a suspected team of thugs,” the platform wrote.

“In a yet to be confirmed report, the campaign organisation was attacked at the venue of the INEC Nigeria Stakeholders meeting ahead of the poll.”

However, combining the TinEye reverse image search tool and Google search engine, The ICIR traced the photo back to April 2015 in South Africa, when xenophobic attacks led to the death and displacement of foreigners.

Newsweek, in its caption, explained that the pictures show a man gesturing “with a stick outside a hostel during anti-immigrant violence in Johannesburg, South Africa, on April 17, 2015”. This is according to a news report published the same day.

The picture was taken by Johannesburg-based Reuters photographer, Siphiwe Sibeko.

The Centre for Democracy and Development (CDD), a not-for-profit research and advocacy organisation, has also pointed out the resurfacing of pictures originally from the 2015 general elections.

A Facebook user, Adams Sirprosper, had written that a group of thugs “invited by APC [All Progressives Congress]” and headed for the Kogi West senatorial district were arrested. But closer scrutiny of the picture attached to this claim shows that it is from a totally different context dating back to April 2015.

As reported by various news blogs, days after the general elections, the pictured “political thugs” had been arrested by security operatives in Nsit Ubiom Local Government Area of Akwa Ibom State.

“The hoodlums were caught with dangerous weapons such as dane guns, cutlasses, cans of fuel, lighters and charms as they attributed their actions to the work of the devil,” one report stated.

The CDD, with observers in various local governments in both Kogi and Bayelsa, has also noted as false a claim that Adoni and Ogoni militants, hired by Jonathan Obuebite (the Bayelsa state commissioner for information and orientation) and Tom Ateke (ex-leader of the Niger Delta Vigilante), attacked members of the APC in Nembe Local Government Area.

“CDD fact-checkers investigated and found out that nothing of such happened,” the non-profit reported.

“There are no citings [sic] of militant groups at Nembe River, as the river is guarded by security personnel. There have been relative peace at Nembe at the time of this fact check. The peddler of this news report, put it out to cause unnecessary tension in Nembe LGA.”

CDD fact-checkers have similarly established that, contrary to the claims, no shooting or snatching of voting materials took place in Nembe Local Government.

Pictures of bad roads in PDP’s press release are of Liberia, NOT Nigeria