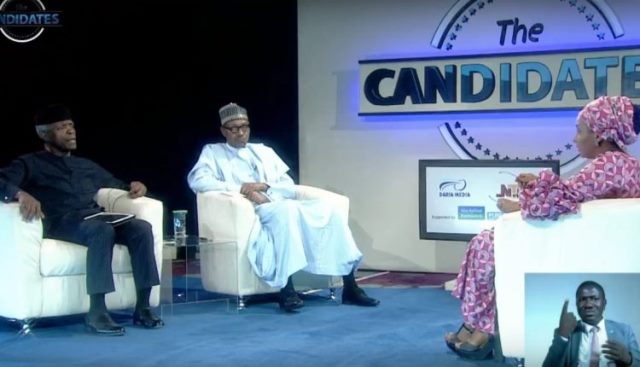 CHECKS conducted by The ICIR have indicated that President Muhammadu Buhari and his running mate, Vice President Yemi Osinbajo, were mistaken about the Discrimination against Persons with Disabilities (Prohibition) Bill yesterday at The Candidates, a presidential town hall meeting co-produced by Daria Media and Nigerian Television Authority.

“I think we sent [it] to the National Assembly,” Buhari said after the host, Kadaria Ahmed, repeated the question on why the bill has not been assented to since its passage.

When Ahmed informed him that the instrument, more commonly referred to as the Disability Rights Bill, has been returned to the presidency, Osinbajo interjected to say he is not aware of that taking place.

There are however no available reports of this demonstration. The last time such protest was reportedly held at the National Assembly by the disability community, to mount pressure on lawmakers into transmitting the bill, was on October 8, 2018 — coincidentally a Wednesday too.

It was at this demonstration that protesters, under the body of the Coalition of Disability Organizations, issued a seven-day ultimatum to the National Assembly.

On December 18, the bill was finally transmitted to the president for assent. This was revealed by David Anyaele, Executive Director of the Centre for Citizens with Disabilities (CCD).

Anyaele had, in November, said the bill had issues with certain clauses that needed to be added and commended the federal legislative houses for completing action on the document. “Now that the National Assembly has completed action on the bill, the focus of our campaign is on the office of the President of the Federal Republic of Nigeria for his assent,” he said.

Last Friday, in Nasarawa, coordinator of the Joint National Association of Persons Living with Disability, Yusuf Iyodo, still urged Buhari to sign the bill into law before the general elections.

Irene Patrick-Ogbogu, Executive Director of the Disability Rights Advocacy Centre, has explained that what the president made reference to was the bill’s return to the National Assembly months ago.

She said she does not understand why the president and the vice seem not to know about this and are passing the buck to the National Assembly.

“We know for a fact that the bill is not with the National Assembly anymore,” she added.

“It’s been transmitted to the president. I think the presidency have to look into their processes and procedures of managing bills or communication from the National Assembly because the bill is there. It just requires assent. My recommendation is for them to look into it immediately, find the bill and sign it into law.”

The lawmaker who sponsored the bill at the House of Representatives, Idagbo Ochiglegor, also said he is surprised the president could not intelligently address why he has not signed the bill into law though it has been transmitted to him. He suggested that Buhari could have rejected the bill without reading it, because he took exception to other bills sent to him at the same time.

“The problem I think is that most of the bills that are transmitted to him are transmitted not as single bills but in batches; and when he has an issue with any particular bill, he does not attend to any other of them,” he said in a phone conversation with The ICIR.

“I think that yesterday’s programme was a wake-up call for him, and I think he should single out the Persons With Disability Bill and sign it into law.”

He said the Vice President does not have the relevant facts as the National Assembly already handled the protest he referred to at the programme. The lawmaker lamented that Nigeria is one of few countries in Africa without a law to protect persons with disability, and added that the bill, when signed, will not only help a lot of people who are disabled, it will also aid Buhari’s aspiration for a second term.

“It makes him popular even before election…, and the disabled people are waiting on the bill to vote for him if they find him worthy,” he said.

The CCD has also made signing the bill a requirement for supporting the Buhari/Osinbajo campaign. The bill has been at the National Assembly since 2000 and it was because the All Progressive Congress promised to expedite its passage in 2015 that its members voted massively for it in the last elections, the group said in 2017.

The presidency asked not to give a comment immediately about the discrepancy. “You can talk to me much later, not now sir,” Ita Enang, former senator and Senior Special Assistant to President Muhammadu Buhari on National Assembly Matters, curtly replied after he was asked for an explanation.

When our reporter asked for a specific time to call again, he did not say. A subsequent call to his phone was not answered.