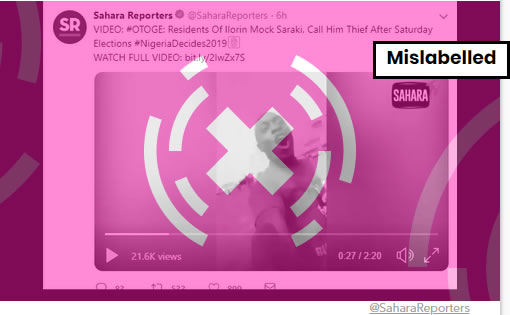 A VIDEO claiming that Bukola Saraki was booed by some people after the February 23 presidential election is not true.

The video, which was shared on the 23rd of February by the Twitter handle @DOlusegun, was captioned”Saraki leaves Ilorin for Abuja after a disgraceful showing at the Polls”. The post had gained an engagement of just two retweets and 295 views by 03:50 pm, February 24.

The video, however, went viral after Sahara Reporters shared the video on its verified Twitter handle, @SaharaReporters.

CrossCheck Nigeria, through its findings, confirmed that the earliest version of the video predates the Saturday election and captioned: “Bukola Saraki driving out of the Ilorin Airport yesterday” (February 21). The video was shared on February 22.

The video actually showed that Saraki was booed but not after the presidential election as claimed by @DOlusegun and Sahara Reporters.