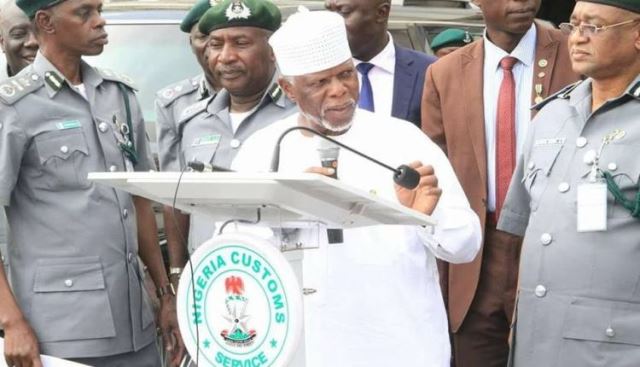 "They closed it for 40 years to the whole world and today they are great China" — Customs boss, Hameed Ali.
Reading Time: 6 minutes

IN DEFENDING Nigeria’s decision to close its land borders, the Comptroller-General of Nigeria Customs Service, Hameed Ali, has repeatedly claimed that China similarly shut its borders to international trading for decades and this somehow improved its economic fortunes. But this is not true.

Following a partial closure exercise two months earlier, the Customs Service announced in October that it had banned the importation and exportation of goods through the country’s land borders to ensure “total control over what comes in”.

Despite widespread criticism from many quarters, including from the Economic Community of West African States, President Muhammadu Buhari earlier this month approved the extension of the closure till the end of January 2020.

To justify the closure weeks ago while addressing the press, Ali said in a widely shared video that China also closed its borders “for 40 years to the whole world and today they are great China”.

“Don’t you want to be great Nigeria?” he then asked.

Last Friday, the Customs boss insisted the federal government will not bow to pressure from neighbouring countries to reopen the borders, again citing the Chinese example—only now halving the number of years.

“The Chinese closed their doors for over 20 years and now they are on top,” he said.

“We need to close our own. There is nothing that is being produced today that we cannot consume in Nigeria. Our industrialists do not have to look out to find the market; we have it right here. And we need to grow that market.”

No evidence this ever happened

The ICIR has found no record proving that China, on its way to becoming a global economic powerhouse, ever shut its frontiers totally to international trade. The contrary appears, in fact, to be the case.

Fatima-Zohra Er-Rafia, an independent researcher and PhD in Business Administration with a focus on China and Japan noted in a 2018 publication that the first of four major factors that made China become the World’s second economic power is “Deng Xiaoping’s opening-up-to-the-world policies and the 1979 Equity Joint Venture Law”. (Xiaoping was China’s paramount leader between 1978 and 1992.)

“Together they have allowed (among other things) foreign capital and Western companies to enter China, transforming the domestic economic landscape entirely from one that is traditional and obsolete to one that is dynamic and modern,” she wrote.

The Chinese, however, did put in place some measure of border closure in the 15th century in reaction to an influx of foreign merchants and settlers and in order to protect local traditions. The isolation of the empire started during the Ming dynasty and continued into Qing dynasty.

Through a series of isolationist policies known as the haijin (or sea ban), the empire ordered the restriction of private maritime trading. Trading still occurred during this period though through piracy and smuggling, and local authorities even disregarded the law by engaging in illicit trading. Nevertheless, the restrictions led to a loss of revenue from taxation, funding difficulties, and a rise in poverty levels.

‘Not in recent times,’ says expert

Hans van de Ven (FBA), a professor of Modern Chinese History at the University of Cambridge, told The ICIR that China has not closed its borders “in recent times” as suggested by Ali.

“If your official is referring to the People’s Republic, China was subject to a US embargo until the 1970s, and hence couldn’t trade with US-allied countries, but that is rather different than China closing its door,” said Hans, who is also a Guest Professor at Nanjing University’s Department of History.

“In this period, China did trade with and exchange personnel with Communist countries. During the Qing dynasty, China did close its doors to foreign trade for a couple of decades, but it needed foreign trade and so opened them again.”

He further emphasised that the link between China closing its country and hence having a vibrant economy, as implied by the Customs boss, “seems very difficult to defend”.

The total trade embargo imposed by the United States followed China’s intervention in the Korean War in the late 1950s and was ended by US President Richard Nixon.

Also writing in response to enquiries from The ICIR, Michael Szonyi, a professor of Chinese History at Harvard University and Director of the Fairbank Center for Chinese Studies, described the claim as “factually inaccurate”.

“At no point in the twentieth-century did China (or any political regime governing China) close its borders to international trade,” he said.

A look through data from the World Bank shows that there was no time in China’s history, from 1960 till date, when either imports or exports of goods and services seized completely.

Interestingly, statistics from the World Bank also reveal that the ascending curve in China’s Gross Domestic Product (GDP) corresponds sharply and proportionally to the curves representing the weight of its imports and exports. This means the country’s GDP increased at the same time and rate as transactions with other countries received a boost.

“Through the 1990s, China began to clock rapid growth rates and joining the World Trade Organisation in 2001 gave it another jolt. Trade barriers and tariffs with other countries were lowered and soon Chinese goods were everywhere,” the BBC reported in October, citing David Mann, global chief economist at Standard Chartered Bank.

‘It is a fallacy’

Former BudgIT head of research and Senior Project Officer at the International Budget Partnership, Atiku Samuel, also described the claim that China closed its borders to the whole world as “actually a fallacy”.

“China has never and will never close its borders to the whole world,” he emphatically told The ICIR.

Samuel said the situation in (West) Africa is a complex one since the communities in various countries were already trading among themselves before modern borders were introduced.

“My own conclusion is that nothing like that exists in the world. I am yet to see it. What you can have is some level of restriction around trade. And then even the modalities for ensuring you have a closed system can never happen in Nigeria, except we have money to fence all the 4000 kilometres (of the border).”

The policy analyst also said, in 2015, Nigeria exported goods worth about N1.04 trillion to West African countries and imported about only N74 billion worth of goods.

Indeed, according to data from the Observatory of Economic Complexity (OEC), between 2010 and 2017, Nigeria exported goods worth up to $25.04 billion to other West African countries while it imported only goods worth $9.09 billion. And, in 2017 alone, its export value to the region was $2.6 billion, far outweighing its import value of $309.1 million.

The implication of this, Samuel explained, is that “Nigeria has more advantage in terms of trade with West Africa … We sell more to them than we actually take from there. That is given. That is a statistic of government”.

He said, with the border closure, Nigeria is not only breaching the ECOWAS free-trading policy but is also encouraging smuggling and black market transactions.

The solution, he concluded, is to address why goods produced locally cannot compete with cheaper ones from other countries and to make legitimate importation hassle-free by improving the ports.

“We need to look at why the cost of production in Nigeria is high and we need to begin to address those issues. That is the only practical way to stop unnecessary importation.”

The claim made by the Customs boss that China, towards becoming a global superpower, closed its borders to the whole world is false. China made that move in the 15th and 16th century, but not only were the protectionist policies unsuccessful and widely disobeyed, they also led to increased poverty levels and reduced government revenue.

The rise of China’s GDP, The ICIR likewise observed, in fact, corresponds over the years with an increase in trading with other countries.

The country did not close its borders in the 20th century when its economic indices sharply improved but rather was on the receiving end of a 21-year trade embargo imposed by the United States and its allies.

FACT CHECK: Are 2 million Nigerians raped every year? Here’s what we know