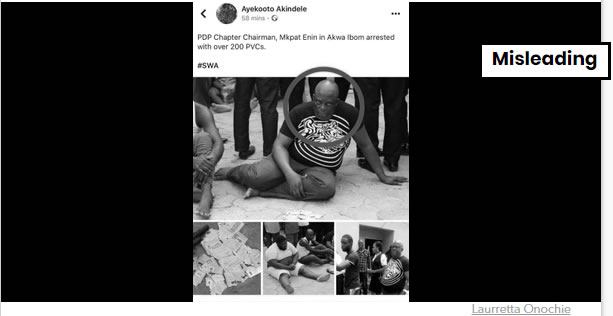 A picture of men allegedly caught with PVCs in Akwa Ibom state is making the rounds on social media, with supporters of both the ruling All Progressives Congress (APC) and the opposition Peoples Democratic Party (PDP) pointing accusing fingers at each other over the picture.

CrossCheck Nigeria has confirmed that one of the men in the photos is Aniete Isoenang, an ex-officio member of the PDP in the Mpkat Enin local government area of Akwa Ibom state.

President Muhammadu Buhari’s aide on New Media, Laurretta Onochie, shared the picture on her Twitter page, saying INEC should investigate who the men are.

She claimed that about 600 of such PVCs were bought with N1million in Delta state.

In one report, it is claimed that the men in the photo are APC thugs while in another, it is alleged that the men belong to the PDP in Mkpat Enin Local Government Area in Akwa Ibom state.

CrossCheck Nigeria (CCN) carried out its investigation and here’s what we found:

Buhari did not vote for Atiku

Video showing Saraki being booed after election is FALSE