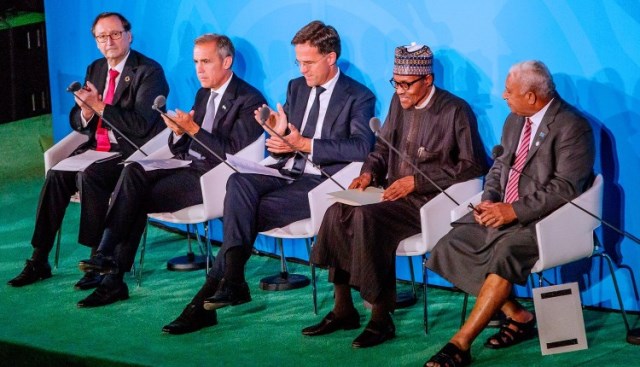 SINCE Tuesday, a video shared on Twitter by special assistant to the president on digital and media, Tolu Ogunlesi, has triggered negative reactions, with many accusing President Muhammadu Buhari of not really answering a question asked or even doubting the clip’s authenticity. But checks by The ICIR have shown these allegations to be misleading.

The four-minute-long video shows Buhari’s speech, following a prompt from the moderator, during a panel of world leaders at the United Nations Climate Action Summit held in New York on Monday.

“President Buhari, Nigeria has a very young population. Perhaps you might highlight what a pathway for a resilient future looks like,” the moderator said.

And in his prepared response, Buhari started by saying: “Your excellencies, ladies and gentlemen. I share the sentiment expressed by the Secretary-General that the world is on the verge of climate catastrophe. Undeniably, Climate Change is a human-induced phenomenon.

“It is now imperative that we must step-up our collective climate actions in line with the request of the Secretary-General. It is in this regard that I wish to reiterate Nigeria’s commitment to its obligation under the Paris Agreement, the aspirations enshrined in our Nationally Determined Contribution (NDC) and ensure a resilient future that mainstreams climate risks in our decision making.”

Reacting to the clip, a number of Twitter users criticised Buhari for not answering the question logically and rather reading a written speech.

Rights activist and co-convener of the Bring Back Our Girls Movement, Aisha Yesufu, teased Buhari and his supporters in several tweets.

“The WhatsApp meeting has been concluded and BMC has given Buharists their narrative. They are using RESILIENT from the question. They never fail to disappoint just like the incompetent clueless and inept Muhammadu Buhari they defend,” she wrote on Wednesday.

“At the end someone will tell Muhammadu Buhari that he did well and poor man will be feeling cool! Our enemies are usually the people with us who don’t tell us the truth,” she also tweeted. “No need engaging Buharists on their RESILIENT narrative. Let them have fun. It must be a herculean task defending the incompetence, ineptitude and cluelessness of Muhammadu Buhari.”

Saint Xavier (@SaintXavier2) also wrote in response to Ogunlesi’s tweet: “He was asked the place of the Nigerian youth in Nigeria’s future, but he read a readily prepared script that’s on climate change. Down this thread, all I see is people praising him for at least being able to read. That’s how hypocrisy numbs the brain and create mediocrity. Akpor!” His response has been retweeted 106 times and liked by 561 users.

“No connection between the question and the answer or did I miss anything?” Anene Chukwuemeka (@EmexOD) observed briefly.

Another Nigerian user, Richard Isedu (@Sterrich) in fact said he doesn’t think the video is real, adding later that his remark was sarcastic.

No, it is not doctored

Checks by The ICIR revealed that the footage is not inaccurate and represents what truly transpired at the UN summit on Monday.

This is evident from a four-hour-long video of the morning session uploaded by the United Nations on YouTube. This version does not have the subtitle and transition included in the video released by the Presidency Office of Digital Engagement (PODE).

Three minutes was allotted to each speaker for their contribution.

An assessment by The ICIR showed that the moderator’s remarks were not direct questions but simply prompts to introduce the panellists’ presentations as well as their country or organisation’s backgrounds.

And she simply told Willis Towers Watson’s CEO, “Mr Haley, the Secretary-General is delighted that you are here today to launch a private sector-led initiative to strengthen the market for resilient investment. You have the floor.”

Just like Buhari, the Prime Ministers of Fiji and the Netherlands read entirely from pre-written speeches addressing similar questions of what their countries are doing to tackle climate change.

Carney and Haley appeared to briefly introduce their presentations extemporaneously before moving to read from their written remarks.

In an article published on Wednesday, Ogunlesi accused the Twitter users of “getting things horribly wrong and/or focusing on the wrong things, while completely missing the real/meaningful/actual message”.

The summit, he explained, was convened by UN Secretary-General Antonio Guterres as an opportunity for world leaders to “come to New York on 23 September with concrete, realistic plans to enhance their nationally determined contributions by 2020, in line with reducing greenhouse gas emissions by 45 per cent over the next decade”.

The theme of the panel where Buhari was featured was “Towards a Resilient Future” and the rider was, “Announcement of plans to mainstream climate risk in decision making.”

“In other words, panellists were billed to deliver remarks announcing their country/organisation plans to build a resilient, climate-sensitive, future,” the special assistant noted. “President Buhari chose to deliver prepared remarks.

“And the moderator’s question, was, in keeping with the theme: ‘President Buhari, Nigeria has a very young population; perhaps you might highlight what a pathway for a resilient future looks like?’

“The President did exactly that, in his prepared remarks, over the next few minutes, highlighting what a ‘resilient future’ will look like in Nigeria — by focusing on the administration’s policies (the ones already being implemented, like the Green Bonds, and the ones set for implementation, like the new tree-planting campaign, and the energy mix target).

“His prepared remarks were wholly in alignment with the theme of the Panel event, and the question he was asked.”

Ogunlesi argued that it was up to Buhari to choose whether to respond extemporaneously or “to go the prepared remarks way”.

“He chose the prepared remarks way. And most importantly, he touched on the issues re: mainstreaming climate action for the future and for the young people of Nigeria,” he added.