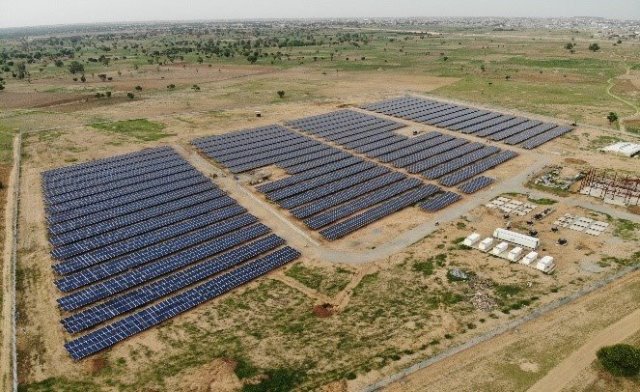 THE Federal Government on Tuesday, September 3 commissioned what it claimed to be the largest off-grid hybrid solar power plant at the Bayero University, Kano. The plant was commissioned by the Vice President, Yemi Osinbajo.

The Managing Director of the Rural Electrification Agency (REA), Damilola Ogunbiyi, stated that “This is the largest off-grid solar hybrid power plant in Africa; We, as Nigerians, should be very proud of, thanks to the commitment of the Federal Government towards sustainable energy and education.

The Minister of Power, Saleh Mamman, in a tweet on Tuesday also shared from his handle that he would accompany the Vice President to commission the largest off-grid solar hybrid power plant. The post has been retweeted about 189 times and liked by 442 people as at the time of filing this report.

The same claim was shared on the official Twitter handle of the Federal Government of Nigeria, @NigeriaGov.

What is a hybrid solar power plant?

A hybrid power plant is one that generates power by using two or more sources of energy. It also refers to a combination of solar and energy storage. The plant combines solar power from a  power system designed to supply usable solar power by means of converting light into electricity.

The power plant has a capacity of 15MWp (megawatt peak), doubling that of the BUK plant, and was awarded by the global renewable energy independent power producer, Total Eren, and African Energy Management Platform (AEMP).

As part of the verification process for the claim, Etore Thomas, the Deputy Director, Press and Public Relations at the Ministry of Power, could not respond to calls and messages sent when The ICIR contacted her even as she read the message sent to her via WhatsApp.

The ICIR contacted Ayang Ogbe, Director of Promotion (Information and Outreach) at the Rural Electrification Agency ( REA). Ogbe referred The ICIR to the website of the REA where numbers of who to talk to can be gotten. However, calls placed to the numbers could not be reached.

“I confirm that the project delivered by Wärtsilä in Essakane, Burkina Faso is to date the world’s largest solar hybrid project and therefore larger than the one delivered in Nigeria,” wrote Fabien Cadaut, Area Marketing Manager of Wärtsilä’s Africa Energy Business.

It is certain that Nigeria is not home to the largest off-grid solar hybrid power plant in Africa. Rather, Burkina Faso, another country in west Africa is.

The claim that the BUK off-grid solar hybrid power plant is the largest in Africa is, therefore, INCORRECT.