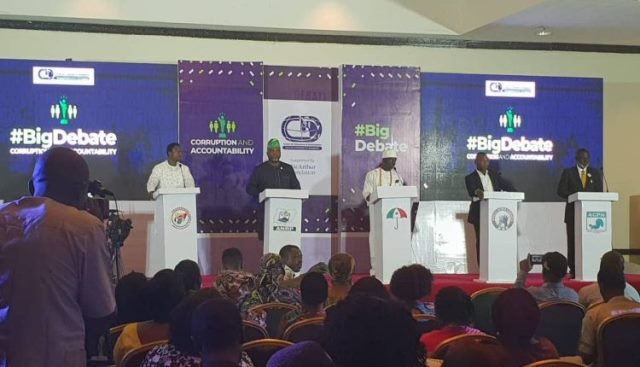 FIVE political parties, represented either by their presidential candidates or top party officials, shared their strategies on the subject of ‘corruption and accountability’ at a debate organised by the Centre for Democracy and Development.

The event took place at Sheraton Hotel, Abuja, and is a continuation of the Nigerian Political Parties Discussion Series. The first of the series, which centred on issues of national security, was held in December and had three parties in attendance.

In this fact-check, The ICIR examines five of the claims made by the representatives of AAC and PDP.

Claim: Nigeria is the capital of where a child is likely to die before five years

“It is a crime that a country like Nigeria making so much money has become the capital of where a child is likely to die before the age of five. It is not only bad but our leaders who are supervising the death of these five-year-olds ought to be tried for a crime against humanity.”

This claim is not in agreement with figures provided by Levels and Trends in Child Mortality, a report compiled by the World Health Organisation (WHO), World Bank Group, United Nations, United Nations International Children’s Emergency Fund (UNICEF). According to the 2017 report, half of all neonatal  deaths (death during the first 28 days of life, constituting 46 per cent of under-five deaths) are concentrated in five countries. India (with 24 per cent) and Pakistan (with 10 per cent) surpassed Nigeria’s 9 per cent of the global figure.

Verdict: The claim is false according to latest statistics.

Claim: There are over 13 million kids who are not in school

“We have to invest in these kids… We also have to take over 13 million kids who are not in school back to school by investing N1.3 trillion in their education, take them out of the streets.”

A similar claim was made during the debate by YPP’s National Publicity Secretary who said Nigeria has about 13.5 million out-of-school children. The source of the figure is Ahmed Bobboyi, Executive Secretary of the Universal Basic Education Commission (UBEC), who said in October that the population of out-of-school children has risen from 10.5 to 13.2 million.

Bobboyi cited as his proof the Demographic Health Survey (DHS) “conducted by UNICEF published in 2015”. An earlier fact-check conducted by The ICIR however revealed that there is no such report. Geoffrey Njoke, a Communication Specialist with UNICEF Nigeria said “the last report on NDHS was that of 2013 and the next edition of the report should be published this year”.

Using the Multiple Indicator Cluster Survey (MICS) conducted by the National Bureau of Statistics and UNICEF and published in early 2018, as advised by the Statistician General of the Federation, Yemi Kale, there are 9.1 million out-of-school children in the country.

Verdict: There is no documentary evidence for this claim.

“The last time I understand, Sowore from the party emerged the presidential candidate without due process, but that is just aside.”

After this claim was made, Sowore responded the next time he was given the floor by saying the party’s convention was broadcast live to everybody, they “didn’t pay anybody $5000 to vote” for the presidential candidate, and they “didn’t take the BDCs (Bureaus de Change) from everywhere to Port Harcourt”.

According to Section 85(6) of the 2010 Electoral Act, where there is only one aspirant in a political party standing for any elective positions, including the presidency, “the party shall convene a special convention or congress at a designated centre on a specified date for the confirmation of such aspirant and the name of the aspirant shall be forwarded to the Commission as the candidate of the party”.

The next sub-section states that a “political party that adopts the system of indirect primaries for the choice of its candidate shall clearly outline in its constitution and rules the procedure for the democratic election of delegates to vote at the convention, congress or meeting”.

According to the constitution the Africa Action Congress (AAC), schedule three on nominations for elections, all aspirants seeking nomination shall submit themselves to the National Convention. It adds that “the candidate that wins more than fifty per cent of the votes of the total delegates of the Special Convention shall be considered duly nominated”.

The AAC National Convention was held in October at Duplex Plaza, CMD, Shangisha, Lagos and, according to media reports, party delegates unanimously decided in favour of the presidential candidacy of Omoyele Sowore, who contested unopposed.

Verdict: The claim is false, as Sowore’s candidacy did not break the relevant laws.

“57 million children don’t have access to basic health needs, and about 150 million or 130 million (thereabouts) according to statistics also live in dirty environments.”

The only study that claims to have measured how many Nigerians live in dirty environments was conducted by a Non-Governmental Organisation called Clean-Up Nigeria (CUN) and was widely reported in November, 2018. Reports say the study has 768 pages, was conducted from October 2017 to October 2018, and is titled: “Clean-Up Nigeria National Technical Working Committee Report on the state of the nation’s cleanliness performance ratings for states of the federation, state capitals/cities in Nigeria.”

Among other claims stated, Ene Baba Owoh Jr, who said he is the CUN’s National Coordinator and Secretary of its National Technical Working Committee (NTWC), said that 175 million Nigerians are living in unclean environments.

The ICIR could however not find this extensive study. The NGO does not appear to have an online presence or a website, and there are very little reports about past activities of the organisation asides the 2018 press briefing.

When an official of Clean-Up Nigeria, the only project by that name with a website, was called, he explained that the website belongs to a project of the African Clean Up Initiative, which has no connections with the other CUN.

Verdict: While the claim is inaccurate according to the only available evidence on the extent of Nigeria’s dirty environment, the source of this proof is unverifiable.

The claim would however be grossly exaggerated if Afegbua was referring only to children. This is because, according to the World Bank, Nigerians under the age of fifteen constitute 43.9 per cent (87.4 million) of the population — nowhere near the PDP campaign spokesman’s figures.

“I am not sure, if you throw the question here, anybody will tell you this is the budget of the EFCC for 2019 or 2018. Everything is shrouded in secrecy.”

The Economic and Financial Crimes Commission (EFCC) was established in 2003 under the administration of former president Olusegun Obasanjo; and checks by The ICIR showed that its budget has been included in the federal budget annually submitted to the National Assembly since 2004.

Verdict: It is false that the budget of the EFCC is not available to the public for perusal.

Immediately after making this claim, Afegbua also claimed that EFCC has not published audited reports for the last 15, 16 years. The senate in March, 2018, levelled a similar allegation when Matthew Urhoghide, chairman of the Public Accounts Committee, reported that certain MDAs including the EFCC have not submitted audit reports since their establishment. The EFCC spokesperson, Wilson Uwujaren, however almost immediately described this as “incorrect”.

“It is incorrect to say that the EFCC never submitted audit report to the office of the auditor-general. A check with that office would have forestalled this error of fact,” he told the press.