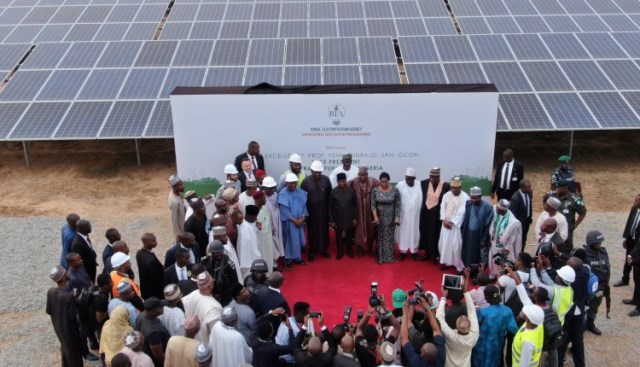 THE Rural Electrification Agency, REA, has reacted to fact-check published by The ICIR on Monday, which debunked the claim that it has commissioned  Africa’s “largest off-grid solar hybrid power plant” in Bayero University Kano (BUK).

The claim was made earlier in September by REA’s Managing Director, Damilola Ogunbiyi, and has been repeated by others, including Minister of Power Saleh Mamman.

The ICIR found a solar plant in Burkina Faso, also hybrid and off-grid, that has a capacity much larger than that of the recently unveiled project in BUK.

Fabien Cadaut, the Africa Energy Business Area Marketing Manager of Wärtsilä, the company that built the hybrid plant in Burkina Faso, confirmed that the project “is to date the world’s largest solar hybrid project and therefore larger than the one delivered in Nigeria”.

But reacting to the report on Tuesday, Ayang Ogbe, REA’s Director of Promotions (Information and Outreach), insisted that REA’s claim is correct and that the fact-check is presenting a “wrong impression”.

“You cannot say that apple is similar to orange,” the REA said during a phone conversation. “What I’m saying is they have different components. If you go to do any search about solar hybrid plants, you’ll see a thousand and one of them. But what we have in BUK is unique.”

In an email later sent to The ICIR by Ogbe, he said the plant in Burkina Faso does not qualify as a solar hybrid power plant but a “hybrid fuel/solar plant” because solar energy is not the dominant energy source.

“The Burkina Faso Project in question is synched to a 55 MW heavy oil fuel plant which makes it a hybrid fuel/solar plant (according to PV magazine) because heavy oil is the dominant source of energy,” he said.

“It is important to note that in the newest technology for solar hybrid powerplants, the PV component should be higher than any other component, which is provided in the Energizing Education BUK project. We maintain that the 7.1MW BUK project is the largest solar hybrid project with Battery storage in Africa.”

He concluded: “In view of these findings, the report published and twitted [sic.] by ICIR is INCORRECT.”

An email sent on Wednesday to METKA, the company commissioned to build the powerplant, asking if it holds the same view as REA is yet to be replied.

Hybrid solar plant or not?

“The actual configuration is very site and company-specific,” it added.

The World Journal of Mechanics, in 2019, also stated that “the hybrid renewable power generation is a system aimed at the production and utilisation of the electrical energy stemming from more than one source, provided that at least one of them is renewable.”

We checked PV magazine reports cited by the REA to substantiate its position. PV magazine is a publication that independently reports solar PV news and was launched in 2008 by the international photovoltaics (PV) community.

In its first report about the plant in Burkina Faso published in March 2017, the magazine described the project first as a “15 MW hybrid PV plant”. PV (photovoltaic) essentially refers to electricity derived from solar energy, and so a hybrid PV plant is the same as a hybrid solar plant.

It used the same description in its 2018 report but added that the project, synchronised with a 55 MW oil-driven power plant, “is one of the largest hybrid fuel/solar plants in the world”.

The ICIR has, however, found no evidence to suggest that the extent of solar energy composition in a hybrid plant affects its description.

Larry Edeh, country director of the Nigeria Alternative Energy Expo and director of the Sustainable Energy Practitioners Association of Nigeria (SEPAN), confirmed this during a phone interview on Thursday.

“A solar hybrid power plant”, he explained, is one where solar energy is augmented with other sources of energy, such as backup batteries or generators; and a powerplant can be called that even if the solar component is lesser in capacity compared to the energy source complementing it.

“These hybrid solutions enable fossil fuel generators to operate at lower loads, thereby significantly reducing the costs related to fuel usage, operation and maintenance,” explained Steven Murdoch, sales director at Global Mining. “They generate solar power but once the capacity drops or becomes intermittent, the generators power on to take up the load.”

On March 16, 2018, Wärtsilä Energy Solutions launched a solar plant with a 15 megawatt (MW) capacity installed for an off-grid gold mine belonging to Iamgold Essakane SA and located in north-eastern Burkina Faso. The mine produces about 400,000 ounces of gold every year.

The plant is hybridised with an existing 55 MW diesel power plant, thus totally a capacity of 70 MW.

Essakane Solar SAS is composed of inverters and switchgear, a control system, and “approximately 130,000 photovoltaic panels”.

“It is estimated that this will reduce fuel consumption by some 6 million litres per year, while reducing the plant’s annual CO2 emissions by as much as 18,500 tons. This project has generated more than 200 employments during the construction phase and is expected to create 75 permanent jobs during the operation phase,” Wärtsilä announced.

On the other hand, the BUK plant, built as part of REA’s Energising Education Programme (EEP), is said to have a 7.1 MW capacity and is expected to supply electricity to 55,815 students and 3,077 workers of the university.

Infographic released by REA says the solar panels are hybridised with backup generators having a capacity of 2.4MW. The project is made possible with the installation of 10,680 solar panels, and also, when fully operational, is to save 49,384 tons of annual carbon dioxide emissions and end the use of 16.5MW petrol and diesel generators.

Also, it is noted that the plant’s construction and installation have created up to 182 jobs, the bulk going to labourers and bricklayers.

REA’s Energising Education Project is no doubt unique, particularly in how it also provides street lighting to schools and establishes training centres for students on renewable energy. Available evidence nevertheless contradicts the claim that the off-grid solar hybrid plants introduced under the project are the largest on the continent.