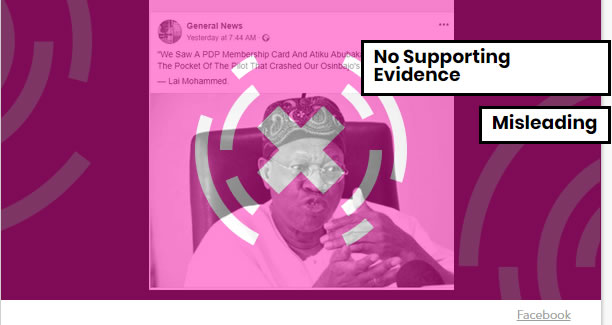 A quote attributed to the Minister of Information, Lai Mohammed that says “We Saw A PDP Membership Card And Atiku Abubakar’s Bank Cheque In The Pocket Of The Pilot That Crashed Our Osinbajo’s Helicopter” is being circulated online. There are also other similar claims that the PDP used Osinbajo’s helicopter for 16 years without servicing it.

CrossCheck Nigeria, a collaboration of newsrooms in Nigeria which includes The ICIR, confirms that this claim is not only misleading but also dubious. Lai Mohammed has not issued an official statement that is related to the Vice President’s helicopter crash of last Saturday.

Shared by one Facebook page, Nigeria News and a Twitter handle @SweetShantel. The two posts on Nigeria News both garnered a total of 314 comments and 343 shares as at 01:39 pm, February 6. The post on @SweetShantel also has the traction of 1,251 retweets and 1,350 likes same time with the post above.

To check this, CCN spoke with the minister’s spokesman, Segun Adeyemi. He denied it and said it is the figment of somebody’s imagination.

“I can tell you categorically that the minister never said anything like that. It must be the figment of somebody’s imagination,” Segun said.

A search for similar publication of this statement on the platform of credible national dailies could not be found.

The helicopter that conveyed Osinbajo and member of his team, crash landed in Kabba, Kogi state on Saturday, February 2, a tweet by Laolu Akande, his special adviser on media and publicity revealed that.

A Vanguard publication reported that Lai Mohammed was in Ilorin, his state capital on Saturday, to commission the state APC secretariat. The highlight of what he said that day according to the report was that Lai Mohammed boasted that the APC candidate would defeat the Senate President, Bukola Saraki and wouldn’t be able to supervise the governorship election in the state.

The question about “We” in the claim; who could he be referring to? Laolu Akande on Sunday, after a thanksgiving service with Osinbajo, said a full investigation into the causes of the incident would be conducted by aviation authorities.

The investigation report has not been made public and as such, the “we” in the statement cannot be trusted.

Taraba villagers did not chase out APC gubernatorial candidate