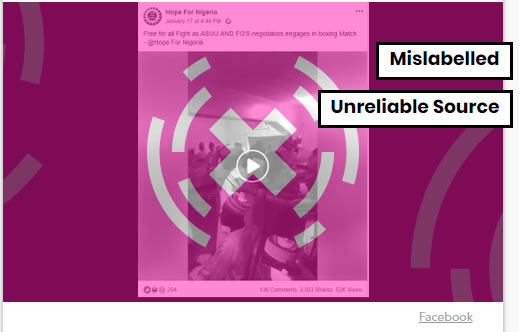 THE negotiating committees of the Federal Government and the Academic Staff Union of Universities (ASUU) have been in a fight, an online video alleges.

Shared on the 17th of January by Hope For Nigeria, a Facebook page, the 20secs video had been viewed 52, 297 times five days later.

A verification check by CrossCheck Nigeria, a collaboration of newsrooms in Nigeria which includes The ICIR, however, reveals that the mentioned parties were not involved in the video being circulated.

“Free for all Fight as ASUU AND FG’s negotiators engages in boxing Match,” the caption read. The post had garnered 2,022 shares and 158 comments as at 19:45 pm on January 22.

A reverse image search on the thumbnails then revealed the brawl as one between supporters of Abdul’aziz Yari, governor of Zamfara state, and Kabir Marafa, a senator from the state, disrupting an APC election committee sitting.

This was reported by The Cable newspaper, who is also a member of the CrossCheck Nigeria coalition.

The oldest version of the video was posted by journalist, Kadaria Ahmed on her twitter handle on October 7, 2018.

She said in her post: “Just a few hours before @OfficialAPCNg has to submit the names of its candidates to @inecnigeria for #NigeriaDecides2019 the situation in Zamfara has deteriorated. Clashes between Gov Yari’s supporters & that of Senator Marafa, disrupt sitting of the election committee”

The video has since been published on several Youtube channels and most of them dating three months ago.

Osinbajo was not booed by angry market women in Ilorin

Amaechi was not arrested over corruption allegation