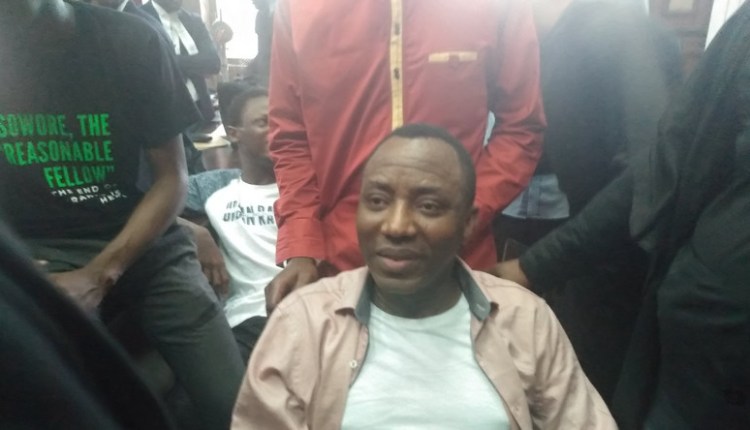 THE CIRCUMSTANCES of former presidential aspirant Omoyele Sowore’s rearrest on Friday have led many to speculate that the Department of State Services (DSS) intends to cause him harm—or that it already has. But there is no reliable information backing any of these claims.

“Watch this video and repeat it over and over again then you will know that Sowore has been poisoned via injection inside the courtroom,” a Twitter user, @Napalivia, wrote assuredly on Saturday. “After the DSS undercover agent successfully injected the poison in Sowore, the very guy that pinned him down quickly released him.”

But not all insinuations about Sowore’s health condition were based strictly on an analysis of the videos. Also on Saturday, Farooq Kperogi, a columnist and Assistant Professor of Communication at Kennesaw State University, wrote that Sahara Reporters (SR), a news agency started by Sowore in 2006, confirmed that its founder is gravely ill.

“Omoyele Sowore MUST NOT DIE in Buhari’s gulag! There’re indications that he was injected with poison in the court yesterday,” Kperogi wrote on Facebook. “Video clips affirm this. Sahara Reporters also said he’s gravely ill now. People of conscience should insist that the DSS bring him out to ascertain his state of health NOW.”

His post has attracted 383 reactions, 46 comments, and has been shared 117 times. It has also been reposted by others on platforms such as Twitter and a news blog.

No such claim in report

Sahara Reporters had, on Friday, reported that there are “renewed fears over Sowore’s safety as strange man hits journalist in neck with unknown substance in courtroom.” This is the closest publication to the attribution made but a read through showed that it does not describe Sowore as gravely ill.

The online newspaper only recounted the events inside the courtroom after the proceedings as captured in various videos, reported that there is growing fear over Sowore’s state of health, and repeated Sowore’s earlier allegation about plans to kill him.

An advanced search through Sahara Reporters’ Twitter account also revealed that, from the beginning of December, the word “poison” has appeared only once from an unrelated report published on the 4th, “sick” has appeared once in an op-ed written by Erasmus Ikhide, and neither “gravely” nor “ill” have been used recently.

The editor of Sahara Reporters, Eric Dumo, told The ICIR on Monday that the information available to him, in fact, is that Sowore is currently in good condition. He also said the media organisation, like everyone else, cannot confirm claims that he was poisoned.

“No, the report wasn’t about him being ill,” he said.

“There were fears about his safety. We published that story because, from that video that has gone viral, if you look at it, you see there is a man struggling under him in the court and somebody, we don’t know who that person is, from behind hit Sowore on the neck and immediately Sowore sprung up and was asking him, ‘Why did you hit me? What did you hit me with?’

“So, that raised some fears that he could have been injected with some unknown substance. But we cannot also verify. We cannot also completely or 100 per cent say this is the fact, but that video raised fears among his supporters, family members.”

He said Sowore is fine “for now” and is not under any threat.

“That report was just reacting to that incident. The report didn’t confirm that we are so sure he was injected… Nobody can confirm that indeed he was injected with any dangerous substance. But as we speak he is in a very good condition. He is not sick or under threat.”

The Sahara Reporters editor, however, stressed that Sowore nevertheless needs medical attention having been in detention for very long.

“This is a man who has been in detention for over 126 days and he has not had access to any doctor or any form of medical care. So it is natural that his health may not be in top shape,” he said.

“But we don’t have any report of his medical state at this time, but from all we have seen it is obvious that the man will need a lot of medical attention having been in detention for that long.”

While Sowore may be safe and sound though, his prolonged detention by the DSS despite court orders granting him bail may have worsened the health condition of his mother, Esther Sowore.

“My mind is disturbed that he has not been allowed to go for medical care since August,” she said in an interview with Objective Media TV last week.

“I am a widow, release my son. I cannot eat, I cannot sleep and it is affecting my health. Please release Omoyele Sowore, my son. He is not a criminal.”

It is incorrect that Sahara Reporters said Sowore is “gravely ill now”. This claim was not made in any of its recent reports and has been denied by the online paper’s editor.

FACT CHECK: Are 2 million Nigerians raped every year? Here’s what we know