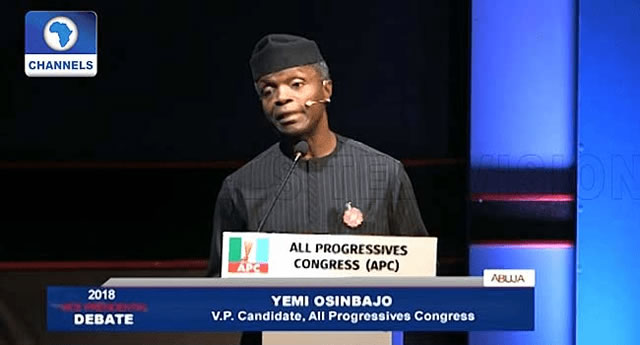 VICE President Yemi Osinbajo was not entirely truthful about the African Continental Free Trade Area during his presentation at Friday’s Vice Presidential debate, The ICIR has discovered.

The debate, which featured five running mates for the 2019 general elections was put together by the Nigeria Elections Debate Group (NEDG) and the Broadcasting Organisations of Nigeria (BON).

Others who participated include Peter Obi of the People’s Democratic Party (PDP), Ganiyu Galadima of the Allied Congress Party of Nigeria (ACPN), Khadijah Abdullahi-Iya of the Alliance for New Nigeria (ANN) and Umma Abdullahi-Getso of the Young Progressives Party (YPP).

In this fact-check, The ICIR shares its findings on Osinbajo’s statement about the free trade area as well as six other claims.

Claim: The continental free trade area has been negotiated for years and these negotiations started under the previous government

“I think my rebuttal is simple. The question really is that the Continental Free Trade Area has been negotiated for years. The negotiation started under the previous government. So the question of consultation or non-consultation and when it ought to have taken place really could have taken place many years ago when they started these negotiations,” he said in rebutting an argument presented by the PDP vice presidential candidate.

The Vice President was correct to say that the continental free trade agreement has been negotiated for years, but he was mistaken to have stated that the negotiations started under the previous administration.

While preliminary planning for the agreement started in 2013 with the inaugural meeting of the Continental Task Force on the Continental free Trade area in Addis Ababa, negotiations did not start until June 2015, when the African Union launched negotiations at the 25th Ordinary Summit of Head of States and Governments in South Africa.

Contrary to Osinbajo’s claims, President Muhammadu Buhari represented Nigeria at this summit in Johannesburg, as he had been sworn into office the previous month.

Claim: Nigeria imported $5 million of rice daily five years ago, and today we are down to 90 percent less

He said: “Barely five years ago, this country was importing $5 million of rice every single day. Today, we are down to 90 percent less. We are producing 90 percent of the rice that we consume and we are importing only two percent of what we used to import.”

It is key to first note that the figures given by the Vice President are self-contradictory. On the one hand, he said imports have reduced by 90 per cent; and then seconds later he added that Nigeria now imports only 2 per cent of what it used to import.

Moreover, the worth of rice Nigeria imported on a daily basis before 2016 depends on who is talking. In July 2015, Governor of Central Bank of Nigeria, Godwin Emefiele, said figures available with the CBN show that “from the period January 2012 to May 2015, the country had spent over 2.41bn dollars on the importation of this commodity [rice].” This, in other words, means the country spent $2.2 million on rice importation every day in those three years.

However, Akinwumi Adesina, then Minister of Agriculture and Rural Development, said in 2013 that Nigeria spent N356 billion annually and nearly N1 billion daily on rice importation. Using the exchange rate of 160 Naira to a dollar applicable then, it would mean the country spent $6.3 million on importing the commodity every day.

As a matter of fact, statistics about rice importation and production have generally been conflicting and lack transparency. While it is true that imports from Thailand have dropped by 96.7 per cent, statistics from the same source suggest that smuggling from Benin Republic and Cameroon may have increased as imports by them increased by an almost equal measure. Besides, the federal government’s figure does not account for rice imports from other countries.

Information Minister Lai Mohammed said in November that Nigeria’s rice consumption is 6 million metric tonnes, while local production capacity is 4.9 million. This means the country produces 81.6 per cent of what it consumes — as against the VP’s 90 per cent.

But, two months after, RIFAN’s National Vice President, Segun Atho said the association’s rice production for the year was 15 million metric tons whereas “Nigerians can only consume six to seven million metric tons”. He added that Nigeria can now start exporting excesses to other African countries.

Verdict: The claim is partly self-contradictory, and the figures available for substantiation are not uniform.

Claim: At least 400,000 people so far brought out of poverty with conditional cash transfer scheme

“Under the NSIP, we have the Conditional Cash Transfer Scheme, taking at least 400,000 people so far out of poverty,” he said just before the moderator interjected.

The Vice President also made this claim in September, but The ICIR has been unable to match it with other sources from the government. It was pointed out in a previous report that Maryam Uwais, Special Adviser to the President on Social Investment Programmes, gave a much lesser figure of 297,973  while addressing newsmen in November.

At the time of the report, The ICIR has been unable to get the National Social Investment Office to clarify the apparent contradictions in the provided figures, as calls placed to Iquo Ayi, the office’s Programme Officer, were not answered, and texts sent to her are still without reply.

Verdict: The claim cannot be corroborated, and it conflicts with other figures provided by the Federal Government.

Claim: We have spent 2.7 trillion in two budget cycles on capital

He said: “In the past three years, the government of President Muhammadu Buhari has spent N2.7 trillion on capital in two budget cycles. That is the highest ever in the history of Nigeria, despite earning 60 percent less than the previous government.”

Verdict: The claim is true.

Only two months ago, however, while addressing participants at the 9th Presidential Quarterly Business Forum in Abuja, the Vice President had goofed by understating the achievement. “We have spent so far in two budgets, N1.7 trillion in capital investment,” he had said.

Claim: We have set up six tech hubs in all six geopolitical zones

In one of his rebuttals, the VP said: “With respect to technology … at the moment, we have set up six technology hubs in the six geopolitical zones. Those technology hubs are being funded mainly by the federal government. Some of them are part-funded.”

The Buhari Media Centre has made a similar claim in its list of “Ongoing/Completed Projects By The Buhari Administration Across 36 States”, which mentions ICT innovation hubs in the FCT and Lagos as part of the government’s achievements.

But going by the details provided to The ICIR on Saturday by Laolu Akande, Senior Special Assistant to the VP on Media and Publicity, Osinbajo is not entirely correct. Akande explained that the administration did not set up hubs in all of the regions but “worked with existing players in the ecosystem” for places where there is already observed innovation activity.

Giving examples, he said the federal government ran the Start-Up Nigeria project to support start-ups in collaboration with Ventures Platform Hub in Abuja (for the North Central) and Genesys Hub, Enugu (for the South East).

“In the South-South we set up the Marydel Hub, in partnership with the Edo Innovates program of the State Government, and also ran programs and projects in the Tinapa Knowledge City,” he added.

“In Lagos, we set up the Nigeria Climate Innovation Center, in partnership with the Enterprise Development Center in the Lagos Business School, and the World Bank. In the North West, we are working with Colab, who have been listed to benefit from world bank GEM funds, and the Kaduna ICT Hub set up in 2016 by the state government in partnership with Zenith.”

Verdict: The claim is partly true.

Claim: Under PDP, Nigeria fell 64 places in the World Bank index of ease of doing business

“I thought the candidate of the PDP would at least acknowledge that while under the PDP, we fell 64 places down on the World Bank index. Under us, in eighteen months, we have moved 24 places up in the ease of doing business,” he said, in reaction to Peter Obi.

Though the Doing Business Report, a co-publication of the World Bank and the International Finance Corporation, has its origin in a paper published in 2002, the ranking of world economies was not introduced until 2006. That year, Nigeria ranked 94 out of 155 countries.

Under the previous administrations led by the People’s Democratic Party, the country’s rank only slightly improved in 2012 and 2013. In 2014, Nigeria dropped further to 147 and this worsened further to 170 in the 2015 report. Since the 2016 report gathered data from June 2014 to June 2015, and it ranked Nigeria 169 out of 189 countries, it means the country fell 75 places under the previous government.

Today, in the latest report for 2019, Nigeria is ranked 146, which means the country has moved up 23 places since the All Progressives Congress took over control of the executive arm of government at the federal level.

Verdict: While the Vice President’s claims are not exactly accurate, they are close to the true figures as may be deduced from the Doing Business Reports released between 2006 and 2019. The number of places Nigeria has improved since APC took over would, however, be 24 if the 2018 ranking were used.

According to the National Bureau of Statistics, 54.7 percent of Nigerians lived in “absolute poverty” in 2004. At this time, the country’s population was estimated at over 138 million, meaning the number of extremely poor Nigerians then would be at least 75.5 million.

In 2014, the bureau’s findings revealed that the number had increased to 112 million, which represented 67 per cent of the country’s 167 million population — though the World Bank’s Nigeria Economic Report of the same year concluded that poverty rates may be significantly lower (33.1 per cent) “using newly-available data on growth, poverty, and living standards”.

Verdict: The claim is true — using statistics provided by the National Bureau of Statistics.