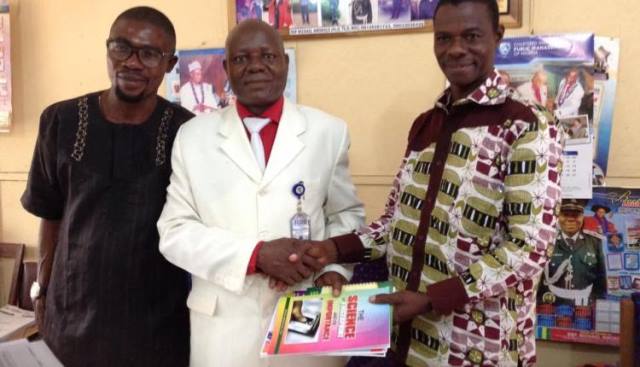 It also states that he is a forensic fingerprint expert, Dr. in leadership, Dr. in graphognomy, Dr. in theology, Deputy Superintendent of Police (DSP), and the head, Latent Fingerprint Unit, Forensic and Crime Data Section, Criminal Investigation Department, Ikoyi, Lagos.

A visit to his LinkedIn and Facebook pages also reveals these many qualifications, and even more. Nwokolo is not shy to flaunt his achievements and has realised the power of the social media in improving career prospects.

A picture of him and a heap of certificates in his office have also been in circulation, and have triggered many Nigerians to ask why Nwokolo, with his numerous honours and degrees, has not been promoted above his current rank as a DSP. Some have even celebrated him as Nigeria’s most educated police officer.

Professor Michael Nwokolo on his Facebook page says the following about himself:

And on LinkedIn, he makes the following claims:

WHAT WE FOUND OUT

It goes without saying that this list is mind-blowing. But it also appears almost too good to be true, thus triggering the decison by the ICIR to investigate how true the claims are. Emails were sent to some of the institutions and calls placed to some others.

However, it is generally expected that for someone with such a robust profile, his internet footprints would be massive. But oddly, a Google search of the words “Michael Nwokolo” returns little relevant results: his LinkedIn profile, his Facebook profile, and numerous blog posts that were published following the emergence of a picture of his business card. There are no news reports, opinion articles, or academic papers in his name.

SOME CLAIMS ARE TRUE

The Green Hills University (GHU), Copenhagen, Denmark, confirmed to the ICIR through an email that “the student Michael Nwokolo graduated from us”. Collins Walsh of the Information Desk also replied that the university has an authorised campus in Nigeria.

Asked if he was at any point a professor or member of faculty, and additionally for details of this Nigerian campus, Walsh said: “Yes, he was a member of the faculty also. I don’t have much information about the Nigeria Station but I will check later with some colleagues who were dealing. Currently we are having a long break/holiday for renovation work and not easy to have my colleagues.”

Agumba Nwajei, President of GHU Africa Campus confirmed to the ICIR, as stated on their Facebook page, that courses are strictly online, and said what they have in Nigeria is an office for guidance and counselling, not a campus.

Wilson Esangbedo, Executive Secretary of the Nigerian Institute for Industrial Security (NIIS) also confirmed to the ICIR that Nwokolo’s claim to being a fellow and executive of the institute is correct and he is known to them.

Likewise, the Occupational Safety and Health Association (OSHA), United Kingdom, replied to similar enquiries in the affirmative. “This is to inform you that the above mentioned name is a confirmed Fellow of the Association, in Nigeria Region,” the Membership Team Unit wrote.

It is also true that Nwokolo has authored a book called “The Challenges of Kidnappings in Nigeria: Kidnapping is a Social Evil”. A picture of the book as well as another, “Unveiling the Power, Potency, Mysteries in Number and the Power in Names”, is uploaded on his Facebook wall.

SOME CLAIMS ARE NOT

Nwokolo says he is a Fellow, Chartered Fraud Examiners (FCFE); but there is no sign of this body online. There are however web references for an Association of Certified Fraud Examiners (ACFE). John Warren, Vice President and General Counsel of the association’s world headquarters, told the ICIR that, according to their records, “Michael Nwokolo has never been a member of the Association of Certified Fraud Examiners”. “We also do not offer a ‘FCFE’ designation, nor do we designate anyone as a ‘Fellow’ of the ACFE’, he added.

More so, there is no recognised Chartered Institute of Fraud Examiners in Nigeria. In 2017, the Nigerian Senate considered a bill to establish a Chartered Institute of Fraud Examiners, sponsored by senator Foster Ogola. However, the bill was eventually withdrawn after opposition from Dino Melaye, who insisted the Economic and Financial Crimes Commission (EFCC) was already performing the duties of the proposed institute.

According to Nwokolo, he is a Fellow of the African Business School (FABS), Fellow Chartered Fraud Examiners (FCFE), and Fellow Chartered Institute of Leadership and Management (FCLIM). While no official website can be linked to any of these bodies, they appear to have something in common: the last two, according to this overview, are both institutes under the African Business School (ABS).

The ABS does not have any functional website but is listed on at least seven internet listing services and business directories: Nigeria Training Courses, Finelib, Business List, VConnect among others.

Additionally, Nwokolo’s claim to have graduated from the Nigerian Institute of Journalism (NIJ) are, at best, suspicious. He states that between 1998 and 1999, he was enrolled in a Post Graduate Diploma in Business Administration and Management at the NIJ. But the institute’s programmes as contained on its website has no mention at all of Business Administration or Management.

The NIJ also confirmed it only offers Mass Communication after a call was placed to its helpline. But it added that they offered other courses in the past and recommended a mail is sent so the examination officer can verify the details. The mail sent has however neither been acknowledged nor replied.

When one of his numbers was called by the ICIR, Nwokolo said he will invite the centre when he has an event as he is unable to comment. “I can’t report anything,” he said. “There is some restriction about me now. We want people not to write anything yet.”

“But if you want to see me, anytime you come into Lagos, I am in the force C.I.D, Alagbon, Lagos. I am a forensic expert. I lecture in UNILAG. I lecture in other universities. In November I will be lecturing in Benue State University; so I lecture in different places. Whenever you are in Lagos, just come. We’ll see and chat.”

Probed further, he maintained that he cannot give any comments, and added: “You must be very loyal to your boss, and you’re supposed to know I am very loyal to my bosses.”

FACT CHECK: Can the GCFR national honour be awarded posthumously?