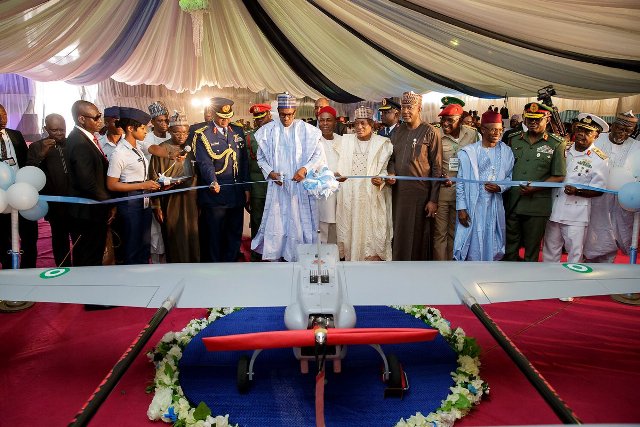 On Thursday, President Muhammadu Buhari launched what the Nigerian Air Force described as the first Unmanned Aerial Vehicle (UAV), popularly known as drone, that was completely manufactured in the country.

Today in Kaduna I attended the induction of @NigAirForce‘s ‘TSAIGUMI’, Nigeria’s first indigenously-developed Unmanned Aerial Vehicle (UAV). It is most gratifying that the Air Force has gone a step further than simply acquiring UAVs, to locally developing them. pic.twitter.com/8pLJizXjV2

But ‘Tsaigumi’ is not the first made-in-Nigeria drone to be launched by NAF, and this is according to the same NAF. However, it could be the first that becomes operational.

In December 2013, then President Goodluck Jonathan also launched a UAV (named Gulma), which Nigerians were told was the first of its kind to be built in-country.

During that ceremony, Jonathan praised the Nigerian Air Force to the high heavens, describing the achievement as “historic”.

“Considering the potential impact of its benefit and versatility, I cannot but say how proud I am of the men and women of our Armed Forces,” Jonathan said at the time.

“Apart from their commitment to the protection of our sovereignty, they are helping to keep our nation ahead in military science and technology and to keep their civilian counterparts on their toes.

“Today, as we stand in appreciation of the gallant men and women of our Air Force, we are reminded that hard work and diligence can break many barriers.”

Also speaking at the event, Alex Badeh, then Chief of Air Force, said the drone could be useful to media practitioners, and urged the government to sustain the tempo of development by ensuring adequate funding for technology-based initiatives.

“The GULMA, as a qualitative, timely and reliable source of information, could serve as a powerful tool for media practitioners. To sustain the current tempo of development, the NAF would require the assistance of government in infrastructure and human capacity development,” Badeh had said.

Thursday’s statement by NAF, however, claimed that the Gulma UAV launched by Jonathan was a “prototype”, unlike the Tsaigumi UAV, which is “a much more advanced and operationalized version”.

The explanation corroborated an earlier statement issued by Yusuf Anas, a NAF spokesperson, in May 2014, which noted that ‘Gulma’ was only a prototype and could not  be operational.

“The Nigerian Air Force unmanned aerial vehicle ‘Gulma’ is yet to be deployed for operational uses. Meanwhile, training of the NAF UAV operators is currently ongoing,” the statement read.

Later on Thursday evening, the Presidency, on its official tweeter handle, clarified that the drone launched by Buhari, is the first “OPERATIONAL” made-in-Nigeria UAV.

Tsaigumi, the UAV inducted into service today is the first OPERATIONAL indigenous UAV developed by @NigAirForce.

The earlier-produced Amebo and Gulma were UAV prototypes that did not go into operation.

Before the ‘Gulma’ UAV, there was a drone named ‘Amebo’, also built by the Nigerian Air Force in 2012, but that too, according to NAF, was a prototype and did not become operational.

Apparently, if or when ‘Tsaigumi’ becomes operational, it will be the first made-in-Nigeria drone to so become.

FACT CHECK: Does Adeosun have the powers to suspend the SEC DG?