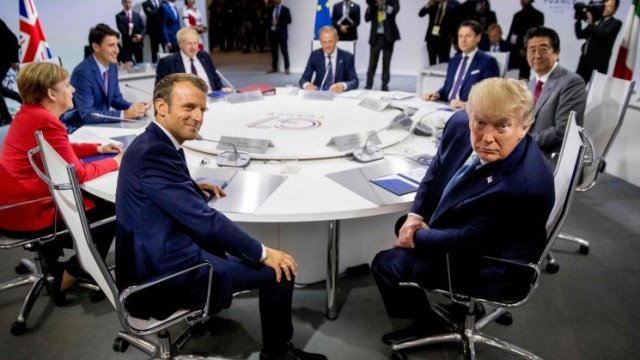 The G7 annual meeting is attended only by the heads of government from the seven permanent member states and two leaders of the European Union (presidents of the Commission and the Council). The G7 member states comprise France, Italy, Canada, Japan, Germany, the US, and the UK.

The exclusion of Nigeria from the list of invited countries has caused a buzz on social media with speculations that  “misrule” of Buhari administration may have been the reason for the exclusion.

A popular tweet by Reno Omokri, a former presidential aide, claims that Nigerian President Muhammadu Buhari was not invited to the G7 summit due Buhari’s “misrule”.

However, a reverse image search of the picture in the tweet revealed that the picture was taken by Getty Images in 2017 at the G7 summit in Italy, thereby bringing the tweet and picture as misleading and not a recent picture. A FactCheck by the Guardian newspaper also debunked Omokri’s claim.

Nigeria was invited to the 2017 edition of the summit. Vice President, Yemi Osinbajo, then Acting President represented President Buhari who was on medical vacation in London. But Buhari attended the 2015 edition hosted by Germany between June 7 and 8, 2015.

The reason why non-G7 countries were invited

Inviting other non-G7 countries and its leaders to attend the annual summit has been a tradition over the past few years. These invitations are extended by the immediate G7 president and reflect the strategic interests of the host country.

According to the “a renewed format for the G7” published on Elysee of the French president’s office stating reasons for inviting partners for this year’s summit.

In times of massive “digital transformation and climate change”, France was keen to include more like-minded and democratic partners at this year’s G7. With this idea in view, four democracies — India, South Africa, Chile, and Australia — were invited to attend the G7 this year.

“With these four major democracies, we will work to strengthen the protection of fundamental freedoms at a time when digital technology and artificial intelligence are developing. We will propose tangible measures to protect the planet, focusing on the protection of biodiversity, the climate, and the oceans. Chile, which will be hosting COP25 in December 2019, will be a key ally in this context,” the statement in the format reads.

Another key aspect of Macron’s G7 presidency was his “African outreach” programme. According to the statement, African countries play a central role in the global fight against inequality.

In view of this, four African countries were invited to attend this year’s G7 summit — Burkina Faso, Egypt, Senegal, and Rwanda. In addition, the president of the African Union, Moussa Faki was also invited to this year’s summit. Faki is the former prime minister of Chad.

The other African country to be invited is South Africa. It has been invited both for its democratic credentials and its role in the African Union.

The leaders of the invited African countries hold key positions in the regional organisations in Africa.

“Together, we want to find effective tools to ensure sustainable economic development in Africa, fostering the creation of jobs for young people and women’s entrepreneurship,” Elysee statement read.