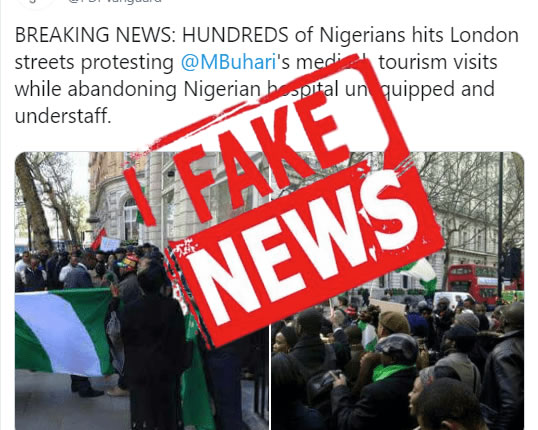 PICTURES showing Nigerians protesting President Muhammadu Buhari’s claimed medical tourism in London are not true, a Fact Check by The ICIR has shown.

The pictures, two in number are being circulated by one twitter handle, @PDPVanguard, with the caption: “BREAKING NEWS: HUNDREDS of Nigerians hits London streets protesting @MBuhari’s medical tourism visits while abandoning Nigeria hospital unequipped and understaff”.

Buhari departed Saudi Arabia for a two-week private visit to the United Kingdom last Saturday. Though, the reason for his private visit was not officially announced to the public.

Checks by The ICIR revealed that the images claimed to be pictures of Nigerians protesting in the UK is not a recent one. In fact, the picture aged four years.

The two  pictures show Nigerians with National flags gathered in front of a building which turned out to be Nigeria High Commission on Northumberland Avenue in London when Google Map Satellite image was used to verify the location.

A reverse image search of the pictures showed the picture surfaced online for the first time in November 2015. One of the pictures was used by a blog called TheNews-Chronicle when it reported Nigerians protesting the unchecked corruption, fraud, illegal arrest, and criminal torture of Nigerians in the UK.

The pictures have since been used by different blogs and websites to tell different stories. For instance, these pictures were used by one blog, Gistmania to tell the story of how Nigerians in the UK stormed the Nigeria High Commission, demanding to see President Buhari who was in the country on a medical vacation in 2017.

Pictures of bad roads in PDP’s press release are of Liberia, NOT Nigeria