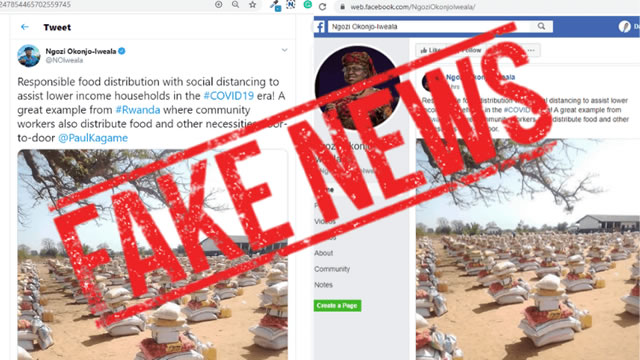 A PHOTOGRAPH shared on Wednesday afternoon by former Nigerian Minister of Finance Ngozi Okonjo – Iweala to portray how the Rwandan government under President Paul Kagame shares food items to low-income households in the country amidst the coronavirus disease has been found to be an old one from 2019.

Okojo – Iweala, an influential personality in global economic and finance circles, took to her verified Twitter handle and Facebook page to share the photo with the caption: “Responsible food distribution with social distancing to assist lower-income households in the #COVID19 era! A great example from #Rwanda where community workers also distribute food and other necessities door-to-door”

The former minister’s post was seen as a subtle criticism of the distribution of food and money by governments in Nigeria, which many believe negates the social distancing advice recommended by medical experts to help halt the spread of the coronavirus.

“Nigeria’s former minister of finance and coordinating minister of economy, Ngozi Okonjo – Iweala, has urged the governments at all levels to emulate Rwanda’s example in the food distribution with social distancing to assist lower-income households as the effect of coronavirus lockdown bites harder,” the story reads.

The online newspaper said Okonjo – Iweala made the plea “in a Facebook post on Wednesday, April 8, adding that community workers distribute food and other necessities door-to-door in Rwanda during the COVID-19 era.”

However, a lead from a comment on her post and through a Rwandan showed that the photo is that of a Gambian Islamic leader who shared food items to the faithful Muslims in his area in 2019.

The photograph was shared by a Facebook page named Brother’s Consulting on May 16, 2019. The post was captioned in French but translated by Facebook to English as “Cheick Elhadj Ibrahim Dinding sylla, a generous donor offers food to the faithful Muslims in his area”.

Brother’s Consulting posted the same pictures that the former Nigerian minister shared on Wednesday along with the photograph of the Gambian Islamic leader.

From the 2019 post alone, it is safe to say that Okonjo – Iweala was sharing a photograph that is nearly a year old to justify what she purports to be the distribution of food items in Rwanda, a process she says is worthy of emulation.

A respected economist, before she joined the government, she had worked with the World Bank, where she rose to the position of Managing Director.

Following her first term as minister, she returned to her job at the World Bank in December 2007 before returning in 2011 as Coordinating Minister for the Economy.

She was recently appointed by the President of South Africa, Cyril Ramaphosa, as a member of the country’s Presidential Economic Advisory Council (PEAC).

Okonjo – Iweala, who has 1.1 million followers on Twitter shared the photograph on Wednesday afternoon and within four hours, the post had garnered 3,251 likes, 1,538 retweets, and 357 comments.

The former Co-ordinating Minister for the Economy in Nigeria also shared the same post and photograph on his Facebook page, where she has over 360,000 followers. It had gotten 965 shares and 1,800 likes as at the time of filing this report

The ICIR could not reach the former minister as the newspaper could not get her contact phone numbers.

However, in a phone chat with her spokesperson, Paul Nwabuikwu,  he said the post must have been an honest mistake on the part of former Minister.

“…Oh! from Gambia, it must be an honest mistake on her part,” Nwabuikwu said. He then asked our reporter to send the post to him so he could share with Okonjo – Iweala.

FACT CHECK: Has Nigeria failed to acquire arms since 1982, as claimed by Dan-Ali?

FACT CHECK: Does 5G pose a health risk to the human body?