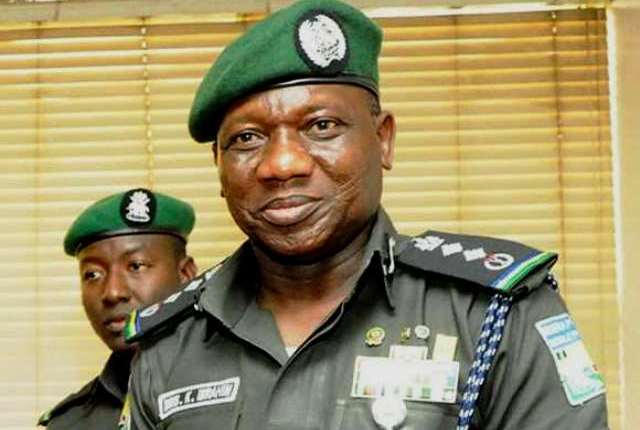 A video emerged online Wednesday, showing a scene where Ibrahim Idris, the Inspector General of Police (IGP), was struggling to read his speech at an event.

The video recording was done on Monday in Kano where Idris went to commission the Nigeria Police Force Technical Intelligence Unit.

The video was released by Voice of Liberty, an online media outfit with office in Abuja.

The only official reaction to the video by the police authority was a single replied tweet that the video was doctored when a Twitter user sought to ascertain the authenticity of the video.

Abike Dabiri-Erewa, the Senior Special Adviser to the President on Diaspora & Foreign Affairs also claimed that the video was doctored with special effect technique used to repeat a mistake made by the police chief.

“This video is definitely doctored, the error was made once, then special effects used to repeat it. What I don’t understand is why anyone would believe. Well, it’s a SM [Social Media] world,” she tweeted in reaction to Joe Abah who suggested that IGP might have a medical problem called dyslexia.

This particular tweet was no longer on her timeline when the ICIR checked on Saturday evening, suggesting that she has deleted it.

Since the video emerged, opinions have been divided on whether the video was manipulated or not. The police could have cleared the confusion by presenting the original video since they claimed the video was doctored.

The most available tools for fact-checking a video are mostly to check if a video is original. For example, reverse image search can be used to find out if there has been an original version of a video online. Another useful online tool to verify a video is the Amnesty International’s YouTube DataViewer which generates the thumbnails used by a video on YouTube and gives room to conduct a reverse image search on them.

In the case of IGP’s video, the online fact-checking tools cannot apply because it has been established that the video is not fake.  Rather the contention is that it was manipulated.

If the mistake was made once and subsequently superimposed on the rest of the video, the repetition will be uniformed voice of that earlier mistake.

In its website, Voice of Liberty says one of its principles include: “what we write, publish or broadcast shall not be divisive, hurtful, libelous or defamatory. We should be aware of the impact of our words and images on the lives of others and the peace of the Nation.”

The website is run by ATAR Communications Limited with an office address in Abuja.

An examination of the IGP’S video showed that the video was edited but was not manipulated. The only editing technique used in the video was cutting. The video was split and joined shortly before a man appeared to help Idris. Probably, this was done to reduce the duration of the video for easy sharing online.

A subsequent video shared by Voice of Liberty showed that the IGP struggled with his speech from the beginning by making unwarranted mistakes but got worse when he started reading from the written speech.  Another video purportedly released by the police showed that he eventually discarded the written speech; nevertheless, he was struggling and repeating words but not as bad as when he was reading.

BASIS FOR DOUBTING THE VIDEO

If the video was released about a decade ago, nobody would have doubted the authenticity of the video. The emergence of reality-altering technologies has made it possible that videos can no longer be accepted on face value.

Supasorn Suwajanakorn, a researcher and his team from the University of Washington shocked the world last year by creating a fake video of Barrack Obama, former US President, by using a computer-generated version of Obama mapped to fit an audio recording.

In a paper published last year, Susajanakorn and his team described how they developed an algorithm that took audio and transposed it on to a 3D model of the president’s face.

The task was completed by a neural network, using 14 hours of Obama speeches and layering that data on top of a basic mouth shape.

Another fake video involving Jacob Zuma, former South African President, also circulated online last year.  Zuma was made to look like he was trying to say the phrase “in the beginning” correctly.

While there are available technologies to create fake videos, none of these were used in the IGP’s video.

Apart from technologies, the fact that IGP has university degree and has been seen reading fluently in the past have made people to believe that the video was doctored.

CONCLUSION: The discernible editing on the IGP’s video was “cut and join”. This does not in any way suggest that the video was doctored as claimed by the police and the presidency.