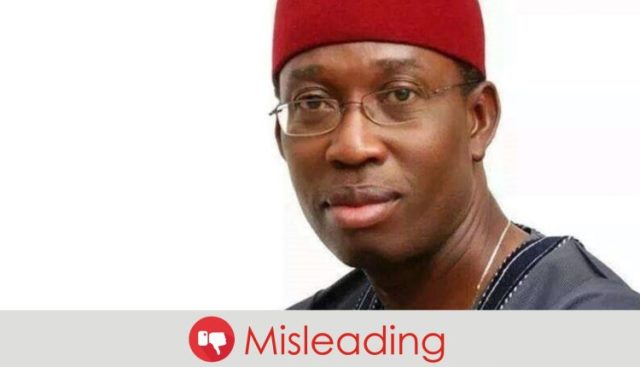 IFEANYI Okowa, Governor of Delta State, said the Internally Generated Revenue (IGR) of his state was as low as N30 billion in 2016 but, thanks to his administration, this has been raised to N51 billion annually.

He passed this remark on Friday at the 14th All Nigeria Editors Conference in Asaba, the state capital, and added that the nearly doubling of IGR was made possible through expanding the scope of tax collection and making it more effective.

“We were able to collect taxes from the market women not just as tax but also as premium for the state health insurance scheme, which they benefit from by paying their taxes,” he said.

Another factor that led to the success recorded, he explained, was the privatisation and effective management of the Asaba Airport, which has been upgraded to enable it accommodate the landing of larger aircraft.

According to him: “We got technical advice to privatise or commercialise the airport and we have published for investors to bid for it.”

The ICIR has, however, discovered the governor’s claim to be exaggerated and misleading, when set against available data.

Belied by the NBS

Data from the National Bureau of Statistics (NBS), the government agency which produces official statistics on behalf of the federation, show that Okowa’s claims are not accurate.

While the internally generated revenue for 2017 is stated to be N51.9 billion and that of 2018 is said to average N4.3 billion monthly (N51.6 billion when stretched for the entire year), it is not true that the IGR of 2016, a year after Okowa was sworn in, was as low as N30 billion.

According to the NBS, Delta State had internally generated a revenue of N44.1 billion in the 2016 calendar year. In other words, the year on year growth (that is percentage increase) is only 17.7% and not 73% — the result when the governor’s understated figured is used.

There is, therefore, a difference of 55.3% between the figures as claimed by the governor and the authentic figures. Also, data compiled by BudgIT, a civic organisation that simplifies the budget and matters of public spending, have shown that it is not the first time Delta State’s IGR will be shooting up beyond N50 billion.

Are there 13.2 million out-of-school children in Nigeria as claimed by UBEC?

FACT CHECK: Has Buhari appointed a ‘Chief Economic Adviser’? Yes and no