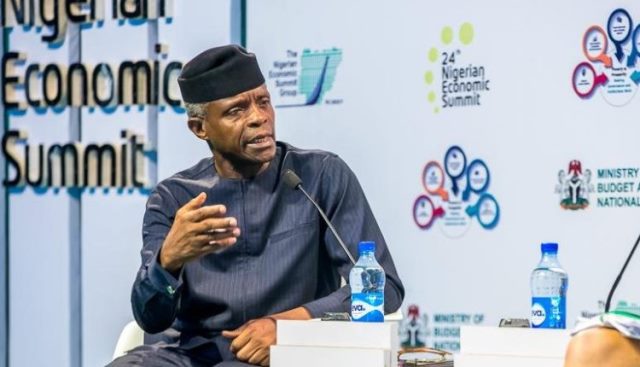 IN an attempt to draw attention to the achievements of the federal government in diversifying the nation’s economy, Vice President Yemi Osinbajo has reeled out figures about the Anchor Borrowers Programme (ABP) which conflict with all other available sources, The ICIR discovers.

One of the most celebrated achievements of the federal government under the leadership of President Muhammadu Buhari are those related to agriculture. The president made sure to emphasise them during his meeting, in April, with British Prime Minister Theresa May. He said it during his Democracy Day speech in May, and has mentioned it on several other occasions.

He has, in fact, accused Nigerian news organisations of under-reporting these achievements, especially as they relate to the local production of rice and the significant drop in imports.

Occupying the centre stage in this narrative is the Anchor Borrowers Programme, to which the bulk of the successes recorded has been attributed. However, as with a number of other top projects executed by the federal government, the ABP has been soiled by secrecy and a lack of transparency — especially in the population and identities of beneficiaries.

Speaking at the 24th Nigerian Economic Summit on October 22, Osinbajo appeared to have exaggerated statistics concerning the ABP, which is coordinated by the Central Bank of Nigeria’s Development Finance Department (DFD).

“And the CBN and 13 participating banks have so far had given credit totalling to N120.6 billion, and this has been given to 720,000 smallholder farmers, who [are] cultivating 12 commodities so far including; Rice, wheat, cotton, Soya beans, Cassava, poultry and groundnut across the 36 States and FCT.”

The Vice President’s figures, however, cannot be traced to any other source, even as they conflict with those which have been provided by the Buhari Media Organisation (BMO) and corroborated in the administration’s scorecard.

According to the BMO, self-described as “a not-for-profit organisation that seeks to amplify the good work … of the Pres. Buhari administration”, the Anchor Borrowers Programme has made available “N82 billion in funding to 350,000 farmers of rice, wheat, maize, cotton, cassava, poultry, soy beans and groundnut; who have cultivated about 400,000 hectares of land”.

The same figures are contained and elaborated in the recently unveiled scorecard and manifesto of President Buhari tagged ‘The Next Level’. About 80 per cent of the N82 billion funding has gone into rice production, the document states, “further driving the nation’s target of attaining self-sufficiency in rice production”.

Lauretta Onochie, Buhari’s social media aide made a similar claim in October when she highlighted sixty-four (64) achievements of the federal government, in reaction to allegations of non-performance.

Likewise, Anne Ihugba, the Head of Corporate Communications at the Nigeria Incentive-Based Risk Sharing System for Agricultural Lending (NIRSAL) has said, through the agency which supervises mapping of farmers and disbursement, the ABP is creating over 250,000 direct jobs for farmers and up to 1.25m indirect jobs.

According to reports, NIRSAL’s entire database of farmers nationwide, from where beneficiaries of the borrowers’ program are drawn, has captured details of only over 400,000. This, as well, is a far cry from Osinbajo’s claim that 720,000 smallholder farmers have benefited from the programme.

The Anchor Borrowers Programme was established by the CBN in fulfilment of its developmental functions. President Buhari launched it in November 2015, with the objective of creating “economic linkage between smallholder farmers and reputable large-scale processors with a view to increasing agricultural output and significantly improving capacity utilization of processors.”

Funding for the project is sourced mainly from the N220 billion Micro, Small and Medium Enterprises Development Fund (MSMEDF) of the CBN, which was launched earlier in 2013.

Despite various calls, details of the claimed beneficiaries of the programme have not been made available by the CBN for independent verification, thus raising doubts about the fund’s credibility.

Investigations have revealed that various other shortcomings are hampering the project’s implementation such as the distribution of expired seedlings, late distribution of fertilisers, delay in fund disbursement, non-compliance from financial institutions, diversion of money into private and unqualified hands, as well as grossly inadequate coverage in various states.

Meanwhile, NIRSAL confirmed in a phone conversation with The ICIR that it is the only body in charge of disbursing funds to farmers under the scheme. An e-mail further sent, upon request, to the Head of Corporate Communications requesting for the latest figure of how many farmers have benefitted so far under the social welfare credit programme, has however not been attended to following an acknowledgement on October 25.

A call placed to CBN’s helpline for the Commercial Agricultural Credit Scheme for the purpose of seeking similar clarifications was however not answered.