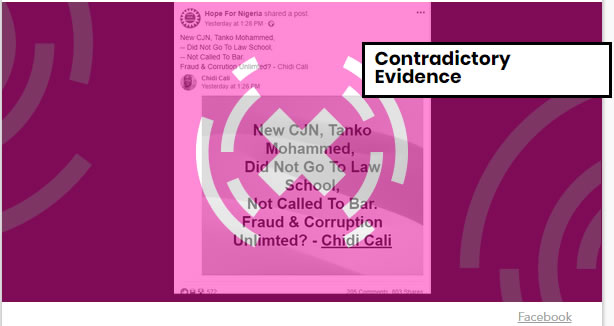 WIDELY shared videos and posts have claimed that the new acting Chief Justice of Nigeria (CJN), Ibrahim Tanko Muhammad did not attend law school and was not called to bar.

Fact-checks by CrossCheck Nigeria, a collaboration of newsrooms in Nigeria which includes The ICIR, confirm that the claims are false.

According to the Nigerian Constitution (231), a person must be called to bar before he or she can practice as a legal practitioner in Nigeria.

According to Muhammad’s profile on the websites of the Supreme Court and the National Judicial Council, he studied law at Ahmadu Bello University, Zaria from 1976-1980 and then at the Nigerian Law School where he was called to bar in 1981.

On January 28, a video shared by the Facebook page “Maiyegun’s Diary Politico”, carried a caption reading: “Buhari appointed a Sharia court judge who was never called to bar or attended law school as Chief Justice of Nigeria.”

In the video a man, protesting President Muhammadu Buhari’s appointment of Muhammad on January 25, claimed that the new Chief Justice was “not even a lawyer” and “had not been called to bar.”

CrossCheck Nigeria also spoke with a former chairman of the Nigerian Bar Association, Ikeja branch, Barrister Monday Ubani concerning the claim. He said: “A lawyer cannot become a magistrate if he or she wasn’t called to bar.” Muhammad began his judicial career as a Magistrate in 1982 with the Bauchi State Judiciary.

Muhammad also served as a Khadi (Judge) of the Sharia Court of Appeal, Bauchi State from 1991-1993.

According to the Nigerian Constitution (276), a person is not qualified to hold office as a Khadi of the Sharia Court of Appeal of a State unless he is a legal practitioner in Nigeria.

A factcheck by The ICIR also reveals how it is not true that Tanko was promoted to the Supreme Court based only on his background as an Islamic scholar.

Was Atiku’s Abuja home besieged by the DSS pre-election 2019?