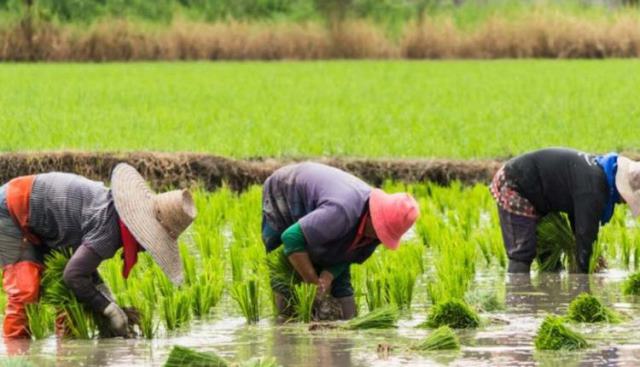 IN JULY 2014, Akinwumi Adesina, then minister of agriculture and rural development, predicted that Nigeria would become Africa’s largest rice exporter ‘in five years’, that is 2019, based on investments in farming and milling.

But recent news about Nigeria becoming the largest producer of rice on the continent cannot be said to be a  fulfilment of this forecast, but a contradiction that has exposed as lie the previous claims by the federal government.

Audu Ogbeh, the current minister of agriculture and rural development, said in May that the country’s rice paddy production is between 5.8 and 6 million tonnes, which had led the government to save up to five million dollars every day. He also said the population of rice farmers in the country has risen from 5 to 12.2 million.

A year earlier in an interview with the News Agency of Nigeria, president of the Rice Farmers Association of Nigeria (RIFAN), Aminu Goronyo, credited the FG’s Anchor Borrowers Programme for the increase in production.

“The consumption rate now is 7.9 million tonnes and the production rate has increased to 5.8 tonnes per annum,’’ he said.

AfricaRice gives a much lower figure

The Africa Rice Centre, a pan-African intergovernmental association and agricultural research organisation, has provided a much lower figure of the quantity of rice produced in Nigeria annually.

The centre has disclosed that Nigeria only produces 4 million tonnes of rice a year in contrast to 5.8 and 6 million tonnes claimed from the federal government and RIFAN.

Speaking to The Nation Newspaper earlier this week, Harold Roy-Macauley, Director-General of AfricaRice, revealed this fact and said Nigeria has supplanted Egypt in its position as Africa’s largest rice producer.

Egypt, he explained, was producing 4.3 tonnes annually but deliberately reduced production by nearly 40 per cent in 2019 in order to “preserve water resources”.

“We cannot do anything else in light of the limited amounts of water we have. We have to grow less rice to save the water for other uses. Egypt is water-poor already and it cannot keep growing crops that need huge amounts of water,” Abdelatif Khalid, Egypt’s head of the irrigation department, had clarified in March 2018.

AfricaRice isn’t the only int’l organisation that has given rice production figures for Nigeria, which contradict the stats by the Nigerian government officials.

In November, information minister Lai Mohammed described the USDA’s report as “fake” and “absolutely false”, while making reference to figures from the Thailand Rice Exporters Association.

The minister also said “the records are very clear as to the importation of rice”, but the federal government has not made public comprehensive, official reports detailing how much rice is imported from different countries, how much is locally produced and where, and how much is smuggled into Nigeria.

As soon as it was published, the report from The Nation Newspaper was latched onto by various individuals and organisations.

The headline reads: ‘Nigeria overtakes Egypt as the largest rice producer in Africa’, but many interpreted it to mean Nigeria’s local rice production has improved thanks to government policies, not Egypt’s decision to cut down production.

The link was shared on Twitter, for instance, by @APCNigeria, a “support account” for the ruling party and President Muhammadu Buhari.

Also, sharing the same link on the social media platform, media aide to the president, Lauretta Onochie, commented: “Nigeria overtakes Egypt as ‘largest rice producer in Africa’ And we have not entered that #NextLevel we just voted for. Hmmm, #SaiBabaBuhari.”

Video showing Saraki being booed after election is FALSE