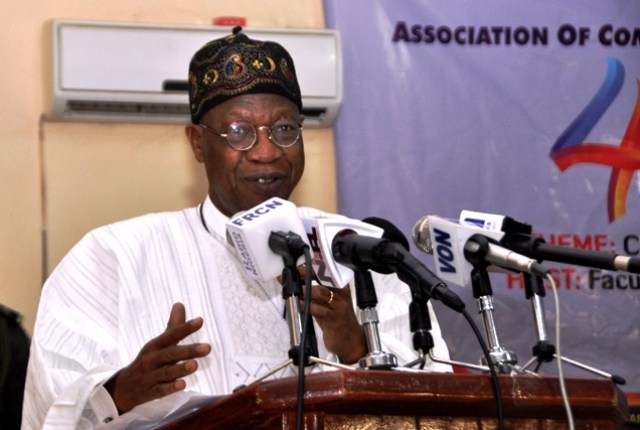 Lai Mohammed, Minister of Information and Culture, says Olisa Metuh, former National Publicity Secretary of the Peoples Democratic Party (PDP), is being tried for defrauding the nation of the sum of N1.4 billion.

Mohammed said this when he addressed a press conference in Lagos on Friday, in response to PDP’s charge that APC should mention names of those it claimed looted the country’s treasury.

“Well, I am sure they know that the treasury was looted dry under their watch, yet they decided to grandstand,” Mohammed said.

“Let’s just give them a teaser with this list: PDP Chairman, Uche Secondus (on the 19th of February, 2015, he took N200m only from the office of the then National Security Adviser).

“The then National Publicity Secretary, Olisah Metuh (on trial for collecting N1.4bn from the office of the then NSA).

“Dr. Raymond Dokpesi, Chairman of DAAR Communications, (on trial for taking N2.1bn from the office of the then NSA).

“Former President Jonathan’s cousin, Robert Azibaola, (on Thursday, a Federal High Court ruled that he has a case to answer for collecting $40m from the office of the then NSA.)”

While it is true that Olisa Metuh is on trial for allegedly collecting money from Sambo Dasuki, former NSA, it is not true that the amount he was accused of collecting is N1.4 billion.

According to information of the official website of the EFCC, Metuh is alleged to have received N400 million from Dasuki, from funds meant for arms procurement. This is way lower than the amount Mohammed said Metuh was being tried for.

One of the charges against Metuh by the EFCC reads: “That you, Olisa Metuh and Destra Investments Limited on or before the 24th November, 2014 in Abuja within the Jurisdiction of this Honourable court took possession of the sum N400,000,000 (Four Hundred Million Naira) only, paid into the account of DESTRA INVESTMENTS LIMITED with DIAMOND BANK Plc account number: 0040437573 from the account of the National Security Adviser  with the Central Bank of Nigeria without contract award when you reasonably ought to have known that the said sum formed part of the proceeds of an unlawful activity of Col. Mohammed Sambo Dasuki (rtd), the then National Security Adviser (to wit; criminal breach of trust and corruption) and thereby committed an offence contrary to Section 15(2), (d) of the Money Laundering (Prohibition) Act, 2011 as amended in 2012 and punishable under Section 15(3) of the same Act”.

Metuh pleaded not guilty when the charges were read to him.

Though the EFCC would file fresh charges against Metuh, they were not for any financial crime, but rather for destruction of evidence.

The charge reads: “Olisa Metuh on the 5th day of January 2016 in Abuja within the jurisdiction of the High Court of the Federal Capital Territory destroyed a document, to wit: a statement made under caution to investigators/operatives of the Economic and Financial Crimes Commission on the 5th of January 2016, with the intention of preventing the same from being produced or used as evidence in a court of law.”

According to the EFCC, the offence is punishable under Section 166 of the Penal Code Cap 532 laws of the Federation of Nigeria, (Abuja) 2004.

Mohammed stressed that the cases he mentioned were not made up as “many of these cases are in court and the records are available”.

However, there’s presently no court case against Uche Secondus, National Chairman of the PDP for collecting N200 million from Dasuki. So Mohammed’s claim to this effect remains debatable unless he has provided evidence to back it.

Secondus has already issued a statement saying Mohammed should get ready to establish his argument in court.

FACT CHECK: Did Dapchi girls return from captivity with ‘Ghana Must Go’ bags?