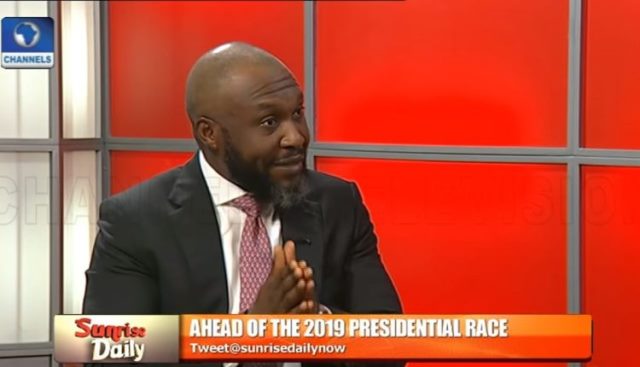 WITH the 2019 presidential election gradually drawing closer, claims are more frequently made in attempts to discredit one political party, candidate or the other. One of such claims was aired on Wednesday during an interview session with Osita Chidoka on Channels TV.

In criticising President Muhammadu Buhari’s economic policies, the former aviation minister and one of the People’s Democratic Party (PDP) founding members said on Sunrise Daily that the federal government has no chief economic adviser.

“The fact remains that as we go to the 2019 election,” he said towards the end of the interview, “what we are going to be confronting is the reality that a government has taken over from the PDP … and today we have more crises than we’ve ever had in the country before.”

When the host observed that the government does have an economic team, Chidoka insisted there is a difference in functions.

“Economic team is the individual ministers,” he explained. “It was started by the PDP to generate key ministers and bring them together into a team. But the president needs an adviser. He has media advisers, almost four of them. He has political advisers. He needs an economic adviser.”

Shortly after the programme, Chidoka again took to Twitter to stand by his earlier assertion, receiving support from a number of other users. He said the federal government has not appointed a “Chief Economic Adviser”. What we rather have is a “Special Adviser to the President on Economic Matters in the Office of the Vice-President”.

The Special Adviser on Economic Matters himself, Adeyemi Dipeolu, has appeared to suggest the same line of argument. When The ICIR recently queried him as to how he spent money allocated, in 2017, for evident-based research studies on the economy, he replied that the project (for the Office of the Chief Economic Adviser) is not under his office.

But is there a substantial difference between these two offices, and has President Buhari appointed a Chief Economic Adviser?

What the official release says

But under the present administration, the closest appointment to this is that of Dipeolu as “Special Adviser to the President (Economic Matters), Office of the Vice President” — as written on the official release by the Secretary to the Government of the Federation. He was as appointed to this role on November 9, 2015, and was officially sworn in in the August, 2016.

However, of all appointees, only Dipeolu has been noted as a member of the Economic Management Team alongside Vice President Yemi Osinbajo, Minister of Budget and Planning, Minister of Finance, Governor of the Central Bank of Nigeria among others. This was a role previously played by the “Chief Economic Adviser”.

What the budgets say

Under previous administrations, a portion of the national budget has always been dedicated to the “Office of the Chief Economic Adviser to the President”, with the budget code “OCEAP” followed by seven figures.

When President Buhari took over, this tradition was maintained. The budgets from 2015 to 2018 have the same section under the “Presidency” with the same office name — though in 2018 the budget code was changed to ERGP as with all other departments, agencies and offices.

Also noteworthy is the fact that records show that not only has money been constantly allocated to this office, money has also been released and withdrawn in the name of Chief Economic Adviser.

For instance, in 2017, N60 million was allocated to OCEAP for capital projects, and records from the office of the Accountant-General reveal that, of this amount, N35 million was cashbacked in the first quarter.

Garba Shehu, Senior Special Assistant to the President on Media and Publicity, has also confirmed to The ICIR that indeed Adeyemi Dipeolu is serving as the nation’s Chief Economic Adviser.

“…We would like to confirm the person presently acting in the capacity as Chief Economic Adviser,” The ICIR asked Shehu in a text message.

While President Buhari has appointed  Dipeolu to act in the capacity of Special Adviser to the President on Economic Matters, it is also true that the president has not conferred the title of “Chief Economic Adviser” on any individual who should have authority over the  OCEAP budget.