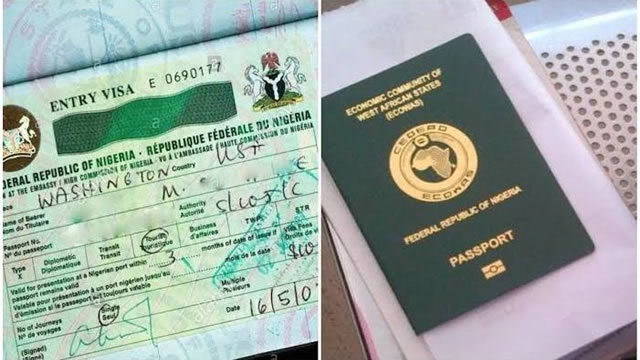 A FACEBOOK post has been circulating on social media stating that the United States, US, government had made an announcement to grant 5,000 Nigerian passport holders free work visas for two years.

The claim is however false as the Nigerian embassy in the US has dissociated itself from the post.

The Facebook account impersonating the Nigerian embassy with the name “Embassy of the Federal Republic of Nigeria, America,” and  with 2,748 followers had on April 25, posted on its Facebook wall that the US was granting 5,000 American work visas to Nigerians for two years.

The phone number displayed on the Facebook page is +1 202-516-4277, as Nigerians who had been denied a visa in the past were urged to participate and abide by the guidelines by sending their passport biodata page for verification.

“You must not write any notes or attach any other credentials while sending your passport biodata page. No introduction is required. Therefore, only your passport must be submitted via our official email info@nigeriaembassyusa.org and not through any other medium,” a section of the message reads.

Checks by The ICIR showed that the Nigerian embassy on April 27, had released a signed statement debunking the claim and also clarifying that the embassy does not carry out engagements on Facebook.

“It has become imperative to set the record straight and inform the general public that the Embassy does not operate a Facebook account page. Thus, the Embassy could not have been mandated to collect any passports from Nigerian citizens on behalf of the US government. This is a fallacy,” the statement reads.

The Nigerian Embassy in Washington D.C also described the post as a “fabricated Facebook announcement” stating that there was no receipt of correspondence between the United States Presidential Task Force Briefing on COVID – 19 and Economic Reform and the Nigerian Embassy.

Also in another development, President Donald Trump of the US on April 22, in a Twitter post said he will sign an executive order to temporarily suspend all immigration to the US because of the coronavirus.

In March, the US suspended almost all visa processing, including for immigrants, because of the pandemic.

While emergency powers have been used to expel thousands of undocumented migrants from the US citing reasons associated with the pandemic. The public health measure allows officials to override immigration laws and expediting removal processes.

Therefore, the claim that America would issue e -visas to 5,000 Nigerians is false as the US government is not keen on receiving immigrants into the country anytime soon.

Was Abba Kyari flown to UK for treatment and cremated?

COVID-19: Nigeria ranks second out of 10 countries with highest confirmed cases in Africa