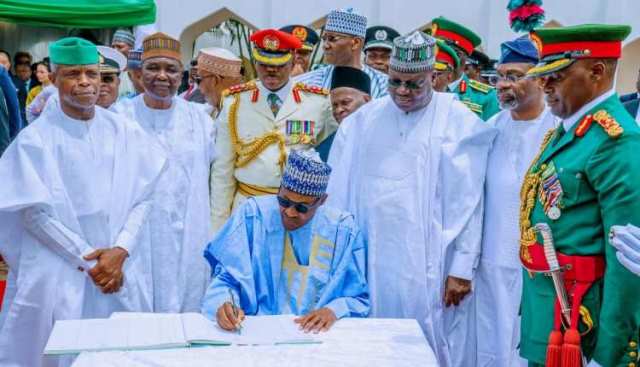 IN his speech delivered on Tuesday to mark Nigeria’s 59th Independence Anniversary celebration, President Muhammadu Buhari cited an outdated figure of the allocation federal government has released for capital projects in the 2018 budget year.

“We are significantly increasing investments in critical infrastructure. Last year, capital releases only commenced with the approval of the Budget in June 2018. However, as at 20th June this year, up to N1.74 trillion had been released for capital projects in the 2018 fiscal year,” he said, before promising to accelerate the implementation of the 2019 capital project.

The president’s claim has, however, been found to conflict with updated figures provided by the Office of the Accountant-General of the Federation (OAGF) in its 2018 Capital Performance for MDAs report.

OAGF’s figures were obtained by The ICIR in July through a Freedom of Information (FOI) request, and reflect capital releases as at June 30.

The document from the Accountant-General’s office states that the grand total of capital releases for the previous fiscal year was N2.06 trillion, including funding from Sukuk proceeds. This is 73.6 per cent of the total approved capital budget of N2.8 trillion.

The difference between Buhari’s and the Accountant-General’ figures is N320 billion.

Buhari also said in his speech that his administration “inherited a skewed economy, where the oil sector comprised only 8 per cent of Gross Domestic Product”.

However, reports from the National Bureau of Statistics (NBS) show a slightly different figure. The oil sector represented 10.45 per cent of Nigeria’s total real GDP at the end of the first quarter in 2015.

At the second quarter during which Buhari was first sworn-in as president, the NBS states that the “oil sector represented 9.80 per cent of total real GDP”.

The figure did not drop to 8.06 per cent until the fourth quarter.

“We now have witnessed eight quarters of positive growth in the economy and our GDP is expected to grow by 2.7 per cent this year,” he had said.

But the figure contradicted similar projections from the Central Bank of Nigeria, Budget Office, African Development Bank, and the International Monetary Fund.