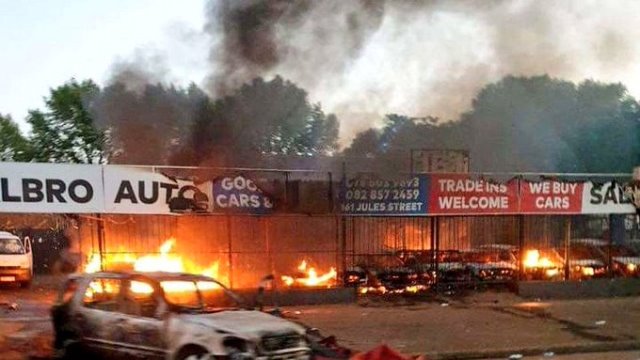 An image of a burnt warehouse shared by a Twitter user, @nyaikae.
Reading Time: 2 minutes

XENOPHOBIC attacks in South Africa have become more prominent, particularly in the past one week, with many foreign nationals killed, threatened, and their shops looted or set ablaze.

Citizens of Nigeria and other African countries have been the major victims of this trend, which has been connected to concerns over job security for South Africans.

Series of recent mob attacks that took place between Sunday and Monday led to the death of three people and the burning of about 50 businesses owned by foreign nationals, thereafter spurring protest from Nigerians on social media.

Several videos and photos have been shared online purportedly showing burnt bodies and shops as a result of the latest attacks.

Checks by The ICIR, however, revealed that some of the pictures and videos are not linked to any xenophobic attacks or are from events that took place in other countries, while others are from old incidents dated back to 2008 in South Africa.

On Tuesday, a Twitter user identified as @Shwinie shared a picture of burnt bodies, numbering more than 20, scattered on the floor.

However, a reverse image search indicates that the photo is not in any way related to the xenophobic attacks.

It appeared in a report of a fuel tanker explosion that occurred in Morogoro city of Tanzania on August 8, 2019. The explosion, according to the report, had resulted in the death of 68 people trying to collect spilled fuel.

Also, a video was shared by many social media users on different platforms including, Youtube and Twitter which displayed a man being burnt alive. The Youtube video shared by See n Talk had gotten 3,750 views. A similar tweet by IU Wakili had received 90,700 views and was shared 895 times at the time of writing this report.

But, the same video appeared in a report of an alleged robber set ablaze in Johannesburg, South Africa, in January 2019.

The report published by a popular South African paper, Times Live, on January 15 noted that the man in the video was assaulted by a mob after allegedly robbing a woman of her handbag in Hillbrow of Johannesburg. This clearly shows the video as not a xenophobic attack.

Similarly, in a popular tweet shared over 1,200 times and liked by more than 2,300 users at the time of writing, two pictures were shared showing a man who had caught fire and the second of a burning warehouse.

A Twitter user with the name, Zero Chills who shared the two pictures wrote: “We are all trying to make a dollar $$ to feed our families and take our children to school, STOP KILLING US and torching our business.”

Though the first photo of the burnt man was related to a xenophobic attack, it is actually an eleven-year-old incident as it first appeared in a report published in June 2008. The photo was included in the report of the U.S-based Boston Globe Media.

The photo’s caption as indicated in the 2008 report read thus: “South African policemen attend to Mozambican immigrant Ernesto Alfabeto Nhamuave who was set on fire in Reiger Park during xenophobic clashes that shook the whole of Johannesburg on May 18, 2008. Nhamuave, a 35-year-old father of three, later died of his injuries, his body returned to Mozambique to be buried”.