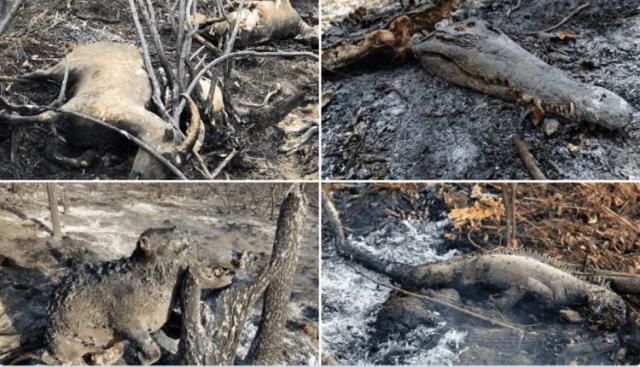 IN August 2019 many news outlets reported that the world’s largest rainforest, the Amazon, was burning at an alarming rate.

The National Institute for Space Research (INPE) in Brazil, the country home to more than two-thirds of the forest, recorded over 70,000 fires across the region in 2019.

Many people have shared images of the fires and of animals killed in them on social media channels. But not all the burnt wild animals in the photos in circulation died in the Amazon.

In one popular tweet, shared over 3,700 times and liked by more than 4,200 users at the time of writing, a US woman shared four pictures of charred bodies of animals. She wrote that the photos showed “only few of that [sic] animals that have been affected by the fire. We must protect our wildlife #AmazonFire #PrayForTheAmazon”.

But all four photos in the post are from fires not in the Amazon rainforest, reverse image searches revealed.

The first photo appeared in reports on forest fires in the Aysén region of Chile in February 2019.

The second seems to show a crocodile burnt in Guanacaste National Park in Costa Rica during a forest fire in April 2016.

The third photo appeared in a report of a fire near Mendoza, a city in Argentina, in January 2018.

And in February 2019, Social Media Hoax Slayer reported that the fourth picture shows a lizard that died in a forest fire in Guatemala. The site linked to a May 2016 report by Prensa Comunitaria, a local news agency in the country, which credited the image to Telenoticias de Petén.

While the Amazon rainforest really is on fire, the four photos in this widely shared tweet are from much earlier time and elsewhere.

This fact-check was produced as part of an Africa Check fellowship completed by ‘Kunle Adebajo, a journalist at Nigeria’s International Centre for Investigative Reporting.