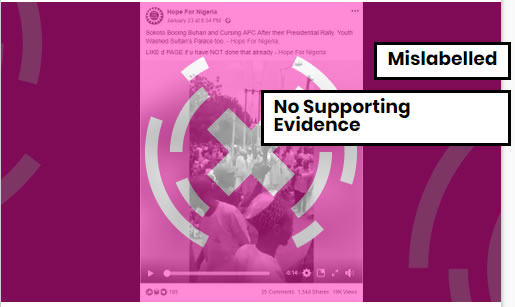 A Facebook page posted a video on its platform claiming that President Muhammadu Buhari was booed after the presidential rally in Sokoto state.

CrossCheck Nigeria, a collaboration of newsrooms in Nigeria which includes The ICIR, confirms that the claim is misleading, as the video is from an event that happened in Sokoto in July 2018, six months before the APC presidential rally.

Using an online video verification software InVID, CrossCheck Nigeria found keyframes from the video. A Yandex reverse image search on each of the keyframes led CrossCheck Nigeria to a report from ionnigeria’s website with the headline: “(Video/Pictures) Watch As Excited Tambuwal Supporters Set Broom Ablaze”. The report was published on August 1, 2018.

The pictures in the report show the reactions from supporters of Governor Aminu Tambuwal of Sokoto state, when he announced his defection from the All Progressives Congress (APC) to the Peoples Democratic Party (PDP).

Supporters of the Governor took to the streets to set APC flags and brooms ablaze in solidarity with the Governor’s move and rejection of the APC. These pictures match exactly the scenes from the currently circulating video.

A further search of the headline revealed that the video was originally shared by the Sokoto state government house through its official Twitter handle at about 05:59 am on Wednesday, August 1, 2018.

A report from the Vanguard Newspaper confirms that the video is from last August, when the Governor defected.