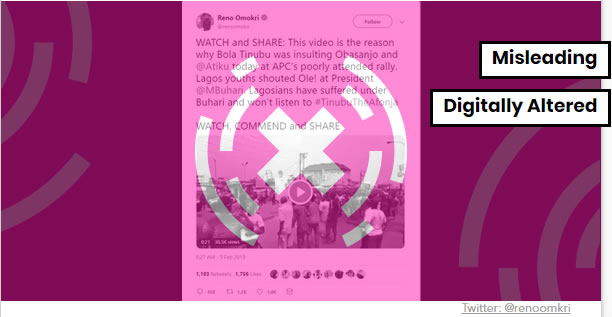 THE claim in a video showing that President Muhammadu Buhari was booed and greeted with chants of ‘ole’, meaning thief in Yoruba language, by youths in Lagos during the presidential rally is FALSE. The video was doctored to validate the claim.

The claim has been shared across various social media platforms by influencers and users.

CrossCheck Nigeria, a collaboration of newsrooms in Nigeria which includes The ICIR, confirms that the claim is FALSE. Though the visual is real and factual, the audio was doctored and imported into it.

Posted by Paul Ibe, spokesperson to Alhaji Atiku Abubakar, PDP presidential candidate, and Reno Omokri at about 04:53 pm and 05:27 pm respectively on their Twitter handles on February 9.

Ibe’s post reads: “This was how youths on Adeniji Adele Road welcomed President Buhari to Lagos: “Ole! Ole!! Ole!!!” For non-Yoruba speaking persons “Ole” means thief in English, “Barawo” in Hausa and “Onye Ohi” in Igbo You may add your own language. #PMBinLagos”

Omokri’s post reads: “WATCH and SHARE: This video is the reason why Bola Tinubu was insulting Obasanjo and @Atiku today at APC’s poorly attended rally. Lagos youths shouted Ole! at President @MBuhari. Lagosians have suffered under Buhari and won’t listen to #TinubuTheAfonja WATCH, COMMEND and SHARE”

An earlier version of the video shared by Jubril A. Gawat, @Mr_JAGs on his Twitter handle revealed that the youths were seen chanting and shouting the popular ‘Sai Baba’ and ‘4plus4’ slogans of the APC in support of the President.

The tweet reads: “Mr President @MBuhari in my area today, Adeniji Adele road, Lagos Island on his way back from the Oba’s Palace .. Boys yapa … No be shere shere .. #PMBinLagos #BuhariIssaGoal”

Buhari did not vote for Atiku