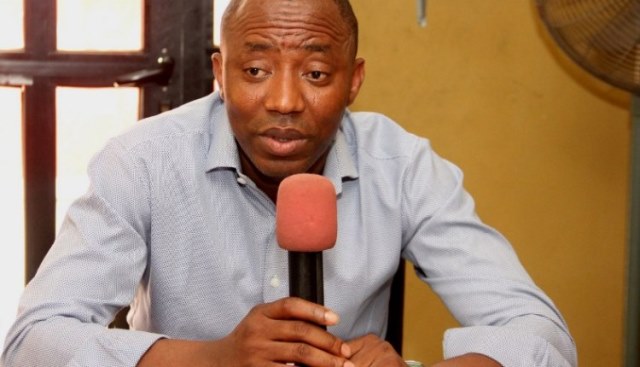 OMOYELE Sowore, the publisher of Sahara Reporters and a presidential aspirant in the forthcoming 2019 general elections, has been consistent in his comments that Nigeria has no business running a bicameral legislature, and that the Senate should be scrapped.

In a news article published by ThisDay newspaper on July 27, Sowore took his grouse with the Senate a notch higher.

According to him,  Nigeria “spends N1 trillion yearly as salaries and emoluments of the senators, including constituency allowances”.

He said this huge amount could have been channelled to the agriculture and education sectors.

Though the report by ThisDay did not quote Sowore as making the above statement word-for-word, the presidential hopeful shared the article on his Facebook timeline, and as at Monday, the post has been further shared by over 300 of his Facebook followers.

However, the ICIR finds Sowore’s claim to be false.

Nigeria’s entire budget for 2018 is approximately N9.1 trillion, the biggest budgetary allocation in the country’s history. In it, the entire budgetary allocation to the National Assembly, comprising the House of Representatives, the Senate and every other parastatal that falls under the legislative arm of government, is approximately N139.5 billion. That was after the initial allocation of N125 billion was increased by N14.5 billion.

This is the largest amount ever budgeted for the National Assembly since Nigeria’s return to democracy in 1999, and the sum is less than 15 per cent of the N1 trillion Sowore claims the Senate alone spends annually.

However, aside from the budgetary allocation to the National Assembly, there is also a separate allocation for zonal intervention projects, popularly known as constituency projects for both legislative chambers. This practice came into effect in 1999, during the Olusegun Obasanjo administration. The amount was N100 billion in 2016, 2017 and 2018 respectively.

There has not been much transparency as to the breakdown of the budgetary allocations to the National Assembly over the years. Also, there have been lots of questions as to whether allocations for zonal intervention projects have been effectively utilised.
However, there is no proof to support the claim that the entire legislative arm of government, let alone the Senate, spends up to a trillion naira annually as claimed by Sowore.

The ICIR called Sowore to get more information but his Nigerian number was switched off. He, however, answered the call put through his US number, promising to call back with his Nigerian number. He has yet to do so as of the time of publishing this report. Messages sent to his phone line, WhatsApp and Facebook timelines were also not responded to.

FACT CHECK: Was Buhari arrested in UK by INTERPOL to answer allegations of war crimes?