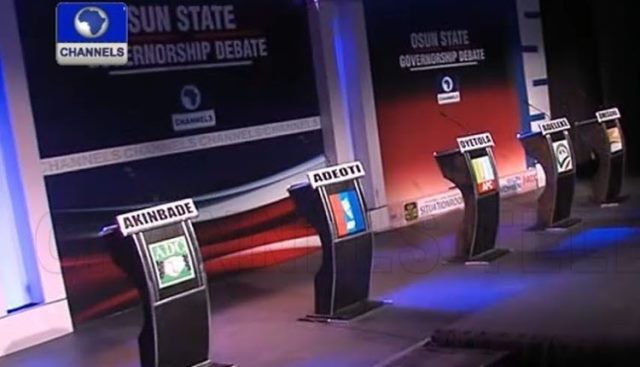 IN the evening of Sunday, six days to the Osun State gubernatorial election, four of the prominent aspirants gathered in Osogbo to demonstrate preparedness for office at the Channels TV debate.

Even though emotional statements and campaign clichés filled the debate atmosphere, occasional errors were committed nonetheless. In this fact-check, The ICIR scrutinises the suspicious claims by three of the candidates.

In reacting to claims from Omisore regarding Osun state’s debt profile, Oyetola said what he knew was that the state’s debt from Sukuk bonds and commercial loans is about N141 billion. He said the state will be free from liability on the bond by 2020. He added, in response to whether Osun’s debts are sustainable, that Nigeria’s debt to GDP ratio on the average is about 40 per cent, and “ours is still less than 6 per cent”.

According to 2017 figures from the National Bureau Statistics stating both external and domestic debt stocks of the various states of the federation, Osun State’s total debt is N167.7 billion. This comprises a domestic debt of N138.2 billion and external debt of $96.6 million.

However, it is not the case that the average debt to GDP ratio in Nigeria is about 40 per cent. According to a report of the National Bureau of Statistics, debts of the various states, that is sub-national debt, in relation to GDP rose from 2.4 per cent in 2014 to 4 per cent in 2016 — only ten per cent of Oyetola’s claim.

When Oyetola was asked if he would be regularising the school system which Osun State introduced  in 2011, he replied: “Even UNESCO [United Nations Educational, Scientific and Cultural Organization] acknowledged the fact that it is the best way to go. And that is the truth… It has not changed the curriculum anyway.”

After an educational summit organised in 2011, the old primary/secondary classification system was renamed and arranged into elementary, middle and high schools. Pupils in elementary school are those from grades, that is primary, one to four. Those in middle school are students from grade five to nine, that is primary five and six, as well as JSS one to three. Finally, high school,  under the new classification, is for SS one to three, which is grade ten to twelve in Osun State.

Grace Titi Laoye-Tomori, Osun State Deputy Governor and Commissioner for Education, has also said the new system is patterned after UNESCO standards. This claim is however misleading.

Claim: There is a reasonable number of women in present Osun cabinet

In the concluding session of the debate, the moderator asked candidates about their position on female participation in governance and gender equality. While addressing the subject, Oyetola said: “Even the existing cabinet is pro-[women]. We have reasonable number of women in the cabinet.” But is this so?

This amounts to only 15.5 per cent — a long way from absolute gender parity or even the 30 per cent affirmative action proposed by the National Gender Policy.

During his remarks, the SDP candidate often reeled off figures without properly putting each one into perspective. Part of his many statistics, which he said he arrived at “having done my own work”, are the budget deficits from 2015 to 2018. He said this to buttress his position of Osun State government’s fiscal indiscipline.

Claim: There are no Opon Imo tablets in Osun State schools

Omisore described the famous Opon Imo (tablet of knowledge) project of the Aregbesola-led Osun State government as a scam, and blamed it for the state’s indebtedness. Not only that, he also claimed “there is no Opon Imo anywhere in this state”. After Oyetola denied his remarks, saying the tablets are available and functional, he said there are no tablets in circulation.

“They brought only a few hundreds and launched,” he said. “I have students that live with me, and I’ve not seen any tablet with them. So I don’t know where they are; maybe they are hidden in government office.”

The Opon Imo project was introduced in 2013 by Rauf Aregbesola, Osun State governor, with the plan of giving out 150,000 units of e-learning tablets to senior secondary school students in order to improve learning and ICT literacy.

One reason that may explain why Omisore has not seen the tablet with students around him is that the state government now distributes it only to students in their final-year and then retrieves it after their final examination. Evidence abounds of the annual distribution and use of the tablets.

Criticising the construction of “mega schools” in the state, Omisore remarked: “By 2010, Osun was in the fourth position. They built mega schools, they went to 29th position.” He  said the mega schools lack basic facilities such as science laboratories, and are not improving the quality of education in Osun.

While it is true that records show Osun was ranked 29 in the state ranking of 2018 released by the West African Examination Council, there is no data online for as far back as 2010.

Reported WAEC performance data of the state covering ten years, however, shows an improvement of 113 per cent in the performance of students. According to the data, while about 7000 students passed with at least five credits in subjects including English and Mathematics in 2010, this figure shot up to about 17,000 in 2016. This was also confirmed, in June, by the state commissioner for education.

Claim: Nigeria signed treaty to appoint women into 33 per cent of political offices

During the last segment of the debate which addressed plans on minorities, Omisore was asked about his position on women in governance. In his response, he said Nigeria signed to the “Protocol of China”, which stipulates 33 per cent political positions for women.

“And as a law-abiding, my minimum will be that 33 per cent. Women will be very happy in the government coming.”

Following the senator’s response, Oyetola gave the figure, according to “the Beijing Convention”, as 35 per cent, and said that was the maximum. Adeoti jumped on the wagon and said he will ensure not less than 35 per cent of political appointments are reserved for women “because it is a resolution of an international body, the United Nations”. Akinbade also made a similar vow of at least 35 per cent .

But is there any such UN resolution proposing an affirmative action of 35 per cent?

The Beijing Declaration of 1995 does not actually state 35 per cent as the minimum extent of female participation in governance. It merely encourages the equal participation of both genders.

Article 13 states: “Women’s empowerment and their full participation on the basis of equality in all spheres of society, including participation in the decision-making process and access to power, are fundamental for the achievement of equality, development and peace.”

The African Union Protocol on Human and People’s Rights on the Rights of Women in Africa (the Maputo Protocol) also makes no particular demands.

Nigeria’s National Gender Policy, however, stipulates that 30 per cent of political posts should be reserved for women.

Claim: My business is already profitable

There is no available evidence showing that Akinbade’s company, the Owu Crown Hotel, has broken even and is profitable.  However, in June, the hotel was among 15 companies sealed off by the Oyo State Board of Internal Revenue for tax violations.

According to the board, the step had to be taken as a result of the companies’ “failure to pay outstanding professional/business registration/renewal fees”.

FACT CHECK: Presidency’s claim about no- allocation for Hilux vehicles in the 2016/2017 budget is false

Are there 13.2 million out-of-school children in Nigeria as claimed by UBEC?