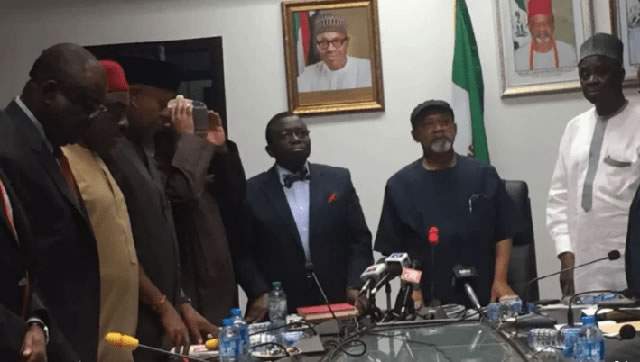 Isaac Adewole, the Minister of Health, has claimed that the Federal Government has implemented 14 of the 15-point demand that prompted the strike by the Joint Health Workers Unions (JOHESU).

The minister claimed that the strike JOHESU embarked upon since April 17 has not been called off because the union is asking for equal pay with doctors.

“But what JOHESU is asking for is parity with medical doctors which is not practicable nor acceptable to the Federal Government,” Adewole claimed.

The minister added that: “a cursory look at the salary tables in the health sector before and after independence till date have always reflected relativity. The 2014 salary adjustment for medical doctors was to correct the anomaly of 2009 and restore relativity.”

The ICIR fact-checked these claims and found that 14 of the 15-point demand of JOHESU have not been implemented as claimed by the minister.

Here are the demands by JOHESU that the Federal Government agreed to implement.

JOHESU claimed that the previous administration of Goodluck Jonathan agreed to implement these demands in 2015.

However, the Minister of Health insisted that there was no agreement between the Federal Government and JOHESU prior to the administration of President Muhammadu Buhari.

He said what JOHESU brandished as 2014 agreement were minutes of meetings they had with the organs of Federal Government.

The implication of when the agreement was reached is that JOHESU wants government to pay arrears from 2014, and not September 2017 which the Buhari administration agreed to. This is one of the demands the minister brandish as implemented.

Furthermore,  the adjustment in the salaries of doctors have been implemented since 2014 and JOHESU is also demanding that the same measures should be applied to its members from 2014, rather than 2017 when Buhari’s administration agreed to review the salaries of JOHESU.

Despite the disagreement on when the implementation should start, some of the 15-point demand by JOHESU has not been implemented, contrary to claims by the Minister of Health.   For example, the government has not increased the retirement age of JOHESU members from 60 to 65 years.

Also the skipping of Consolidated Health Salary Scale (CONHESS 10) arrears has not been paid as well as the implementation of the scale to scale promotion, especially on CONHESS 14 to 15.

Other demands that have not been implemented include employment of health workers to address the shortage of manpower in critical professional areas.

CONCLUSION: The statement by the Minister of Health that all the 14 of the 15 demands of JOHESU have been met by government is false.

COVID-19: Nigeria ranks second out of 10 countries with highest confirmed cases in Africa

Flair Aviation is German-based, not UK as claimed by Aviation Minister