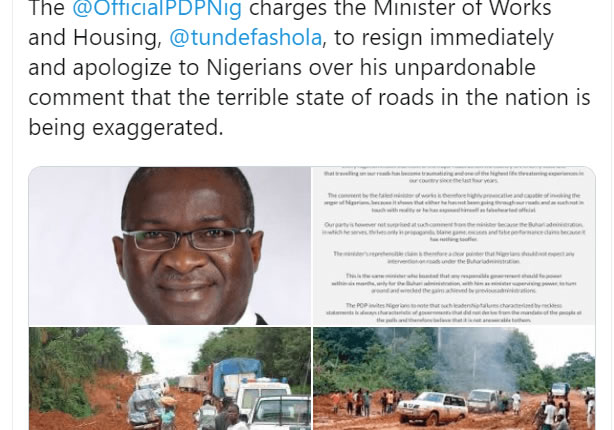 THE pictures shared by the People’s Democratic Party (PDP) alongside its press release on the state of bad roads in Nigeria are not of Nigeria. Those pictures are from Liberia, a Fact Check by The ICIR has shown.

The PDP, in a post of November 8, shared on its official Twitter handle, @OfficialPDPNig showed two pictures of supposed bad roads in Nigeria, and advised the Minister of Works and Housing, Babatunde Fashola to resign and apologise to Nigerians after his statement that Nigerian roads are not as bad as often portrayed.

As at the time of this report, the tweet has generated 351 retweets and 931 likes.

Many Nigerians have criticised Mr. Fashola over the statement, including a non-governmental organisation, Leadership and Accountability Initiative, that wrote to the minister, inviting him over on an all-expense-paid tour of Nigerian roads to see how bad Nigerians roads were.

A reverse image search of one of the pictures revealed that the picture surfaced online for the first time in 2016.  A Liberian local newspaper Daily Observer had reported how the road condition in south-eastern Liberia was causing serious havoc for motorists, passengers and students who no longer use the road network because of its deplorable condition.

Another reverse image search on the second picture showed that the picture was first used online in February 2017. The same Daily Observer newspaper had used it to report that five South-eastern counties’ road work was underway. Again, in September 2017, the Daily Observer used the picture to also report how the deplorable condition in one of the counties had delayed people from travelling and even travelled at high costs to reach their destination.

In an editorial dated March 21, 2018, Globe Afrique, also a Liberian based newspaper had published an editorial titled “Weah’s Vision for a road network excellent, but why is the IMF concern” using one of the pictures as its featured image.