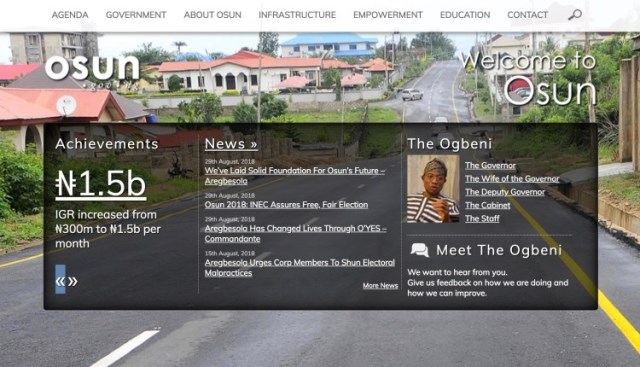 GOVERNOR Rauf  Aregbesola has listed 10 major achievements of his 8-year tenure on the website of Osun State government.

The third on the list of his achievements is that the government has increased the Internally Generated Revenue (IGR) from N300, 000,000 to N1.5 billion every month.

Speaking at Africa Digital Forum five years ago, with the theme “Deepening e-Governance, Transparency with Broadband Access”,  Aregbeshola said Osun state government has continued to increase its IGR to N1.5 billion every month with the deployment of electronic payment technology (E-Payment).

Aregbesola listed this achievement as one of his selling points while campaigning for the second term as governor.

Even as his tenure expires in three months or thereabouts, the governor conspicuously highlighted on the state’s website the N1.5 billion IGR as one of his successes in government.

But the data published by National Burea of Statistics(NBS), the agency that manages the country’s database, shows that the governor’s claim is misleading.

According to the NBS data, Osun State has never generated up to N1.5 billion in a month throughout the last 8 years of Aregbesola’s administration as the governor claimed.

On the average, the highest the state ever generated between  2011 and 2017 is N997 million per month, when the total IGR for a year is divided by 12 months.

And that was in 2017, the year preceding the 2o18 election.  For that year, the total IGR is 11.7 billion, the highest in eight years, according to NBS.

Though The Guardian newspaper had already published the inconsistency in the records of the Osun State government in 2016, the governor has countered the publication with a different claim without making its record public. The rebuttal was followed with sponsored articles in national dailies.

Yet, the state is among those whose comprehensive budget is inaccessible to the public.

In a rejoinder published by the state in The Guardian, the government admitted it never generated as much as N1.5 billion. But the claim on its website specifically stated that it has consistently generated N1.5 billion on monthly basis.

The ICIR checked the only public record of IGR of the 36 states published by NBS and found that the record for Osun State is inconsistent with the claim on the government’s website.

On Friday, August 31, The ICIR  sent questions to Alhaji Bola Oyebamiji, the state commissioner for finance,  through his official address: hc.finance@osun.gov.ng, to clarify the inconsistency, but he has not responded as at the time of publication.

Another letter was sent on Sunday, September 2. Governor Aregbesola and his cabinet members, including the commissioner for information and strategy, Mr. Adelani Oluwatoyin Baderinwa,  were copied in the letter. Till date, none of them has responded to the mail.

Notwithstanding, the NBS data shows that the IGR of Osun State indeed has increased in the last eight years of Governor Aregbesola administration. Between 2010 and 2017, the state generated N61.8 billion. But the government’s claim that it has generated N1.5 billion every month is false.

FACT CHECK: Presidency’s claim about no- allocation for Hilux vehicles in the 2016/2017 budget is false