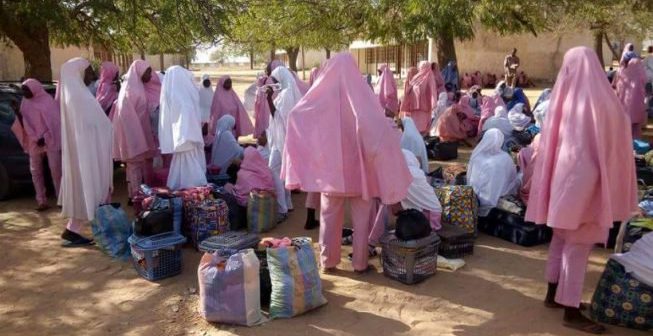 The mood in Nigeria has generally been celebratory since Wednesday, following the release of 105 schoolgirls abducted by Boko Haram from the Government Girls Science and Technical College, Yobe State.

But this has not stopped allegations, counter-allegations and even conspiracy theories from seeping into the ongoing conversations. Most prominent of all, the APC-led Federal Government has been accused of staging the saga, from the abduction to the eventual release of the girls.

The People’s Democratic Party (PDP) levelled this allegation on Wednesday through its official Twitter handle, and called on “the @UN and the International Criminal Court to declare this evil by the @APCNigeria Federal Government a war crime against humanity and immediately commence investigation on the matter”.

Mr. Kola Ologbondiyan, the party’s National Publicity Secretary, made the same allegation at a press conference in Abuja.

“Nigerians know that the main aim of this devilish act was to delude the public, set the stage for an orchestrated rescue, create a heroic myth and false sense of achievement around the APC administration and serve as a spur for President Muhammadu Buhari’s declaration to contest the 2019 presidential election, perhaps in the coming weeks,” he said.

More specifically, eyebrows have been raised regarding a picture making the rounds, showing the Dapchi girls in pink hijabs and heavily-loaded “Ghana-must-go” bags. The picture was used by PremiumTimes Hausa in a report published on Wednesday about the ordered closure of boarding schools in Dapchi and Borno.

One of the prominent personalities who have raised questions respecting the photo is lawyer and former minister, Femi Fani-Kayode.

In an article published on Thursday, he wrote: “So many questions need to be answered. For example how do you explain the Ghana Must Go bags that the girls were carrying on their return? Did they go shopping in Sambisa Forest? Or is it that when they abducted them they gave them time to pack all their clothes and allowed them to bring them back when freed?”

Another blog has the picture uploaded and asked two similar questions, “Were they kidnapped or did they go on vacation? How did they come by the Travel Bags and the items therein when they were kidnapped from the School?”

Many other Nigerians have shared the picture on the social media with questions and allegations along the same line.

THE SOURCE OF THE PICTURE?

Although the exact source of this picture is unclear, it has been on the Internet for at least a month before yesterday’s release of the Dapchi schoolgirls, also in connection to the case.

In fact, The Cable used it on February 24 in a story titled ‘FULL LIST: The 105 missing Dapchi girls’.

Daily Post had used it two days earlier in another story: ‘2 Yobe schoolgirls killed in rescue operation, others still missing’. The same platform again used it on February 25 in a published list of the names of the missing schoolgirls.

Also on February 25, 2018, Business Online used the same picture in a report of the Federal Government’s confirmation of the abduction.

FACES OF THE REAL DAPCHI GIRLS

Let us start with this photo news by Daily Nigerian with eight pictures showing some of the released schoolgirls in light brown hijabs.

PM News also uploaded a similar picture on Wednesday with the caption, ‘The released Dapchi girls’.

A story from Punch contains even greater detail. The feature image used has the caption, ‘Freed 106 Dapchi girls assembled at the Nigerian Air Force Base in Maiduguri on Wednesday. Source: @buharisallau Instagram page.’

Buhari Sallau, who describes himself as a news personality, has even more pictures showing the schoolgirls indoors on his Instagram page.

The Guardian Nigeria has also uploaded an image showing the released girls, which was credited to Ola Lanre of Reuters. The caption states: ‘Some of the newly-released Dapchi schoolgirls are pictured in Jumbam village, Yobe State, Nigeria March 21, 2018.’ Similar pictures were published by The Cable and Vanguard.

It is NOT TRUE, based on available evidence, that the released Dapchi girls were wearing uniform pink hijabs, bearing large travel bags colloquially known as ‘Ghana Must Go’.

On the contrary, many of the schoolgirls wore brown hijabs upon their return and were seen nowhere close to the ‘Ghana Must Go’ bags suggesting they had time to pack their belongings before the abduction or that their abductors gifted them the bags and their contents.

Whether or not the government played an active role in the abduction and release is in doubt, but the circulated picture DOES NOT substantiate the theory that it was “stage-managed”.

Did Nigeria record a reduction in preschool enrolment?

FACT CHECK: Did Metuh take N1.4bn from NSA, as claimed by Lai Mohammed?