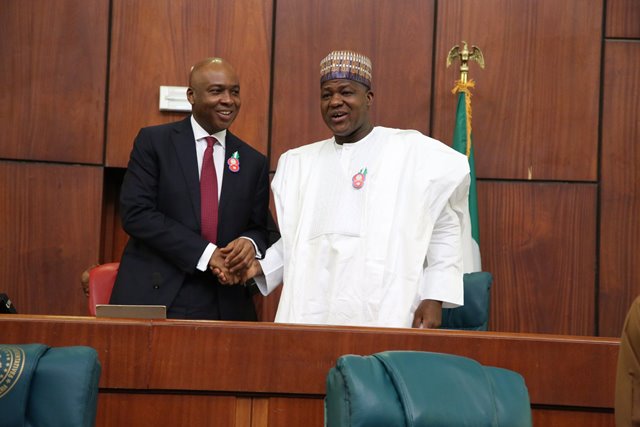 At a public lecture in Lagos, earlier in the week, Itse Sagay, Chairman of the Presidential Advisory Committee against Corruption (PACAC), accused legislators of earning way higher than the US President.

“While the United States President earns $400,000 per annum, a Nigerian senator earns over $1.7 million,” he said.

The vocal professor of law said that though the basic salary of a lawmaker is about N2.4m per month, they earn many funny allowances adding up to N29.5m per month and N3.2bn per annum.

Sagay said the legislative arm of government poses the greatest challenge to the anti-corruption campaign of the Muhammadu Buhari administration.

Aliyu Sabi-Abdullahi, Chairman of the Senate Committee on Media and Public Affairs, described Sagay’s comments as false and borne out of sheer ignorance.

“Sagay has been one of the few divisive elements in the Buhari administration who believe their relevance is enhanced only when they create constant tension between the legislature and the executive while also setting members of the executives against each other,” Abdullahi stated.

“Let us make it clear that our salaries and allowances are open books and the details can be taken from the RMFAC by any interested party.”

When the ICIR checked the website of the Revenue Mobilization Allocation and Fiscal Commission (RMAFC), the column for ‘Remuneration Package’ read “Empty section. Edit page to add content here.”

This indicates that there was no information on the remuneration of public officers on the site as of Saturday, when it was last checked.

However, a report by Premium Times in August 2015 detailed how much each senator and member of the House of Representatives earns on monthly and annual basis at the time.

This includes their basic salaries and numerous regular allowances. However, legislators are also paid some other allowances such as estacodes and duty tour allowances.

“The earning of each of the 360 members of the House of Representatives is estimated at N18.26 million, (while) each of the 109 senators earns a bit higher, pocketing N19.66 million each a year,” the report said.

“Additionally, each senator collects N1.01 million a year for his or her domestic staff, while each member of the House of Representatives collects N1 million for the same purpose.”

All the allowances put together, “the 360 members of the House of Representatives gulp N6.58 billion from the nation’s treasury in annual salaries and allowances, while the 109 Senators cost the nation N2.14 billion in similar emoluments.

“Cumulatively, the country shells out a hefty N8.72 billion every year in salaries and allowances to lawmakers in the two chambers of the National Assembly.”

However, the analyses of the lawmakers’ pay did not include “the illegal but hefty quarterly allowances lawmakers pay themselves” in the name of “office running cost”.

“It is unclear how much it is now. In 2009, it was N192million per senator per quarter while their House of Representatives counterparts received N140 million per quarter,” the report added.

Similarly, a 2016 report by the Economic intelligence magazine, “Senators and Members of the House of Representatives received a total of N6.78 billion as their official salaries and allowances in one year”.

While the official earnings of each lawmaker is not as high as the N3.2 billion quoted by Sagay, the opaqueness that has characterised the remuneration of lawmakers over the years has made it difficult, if not impossible, to state with clarity how much they actually take home monthly, quarterly or annually.

For instance, in April this year, Yakubu Dogara, Speaker of the House of Representatives, released his  six months payslips in reply to a challenge by Nasir El-Rufai, the Governor of Kaduna State, who had dared him to make his earnings public.

But Abdulmumin Jibrin, the suspended former House Committee Chairman on Appropriation, countered Dogara’s claims, saying that if what the Speaker published was true, then he earned more than Dogara, which was impossible.

10-If what I saw is the authentic pay slip of Mr Speaker, it means I earn more than him from what I see in my salary statement of account

9-Its no favour to Nigerians disclosing details of budget. In fact, it is a criminal offense to refuse even members copy of their budget

This only buttresses the fact that there is little or no transparency with regards to what Nigerian lawmakers earn and this does not augur well for the anti-corruption campaign.

FACT CHECK: Are education parastatals over-populated by Muslims as alleged by CAN President?

FACT CHECK: Did Jonathan, as president, ‘take education seriously’, as he claimed in Malaysia? Well…