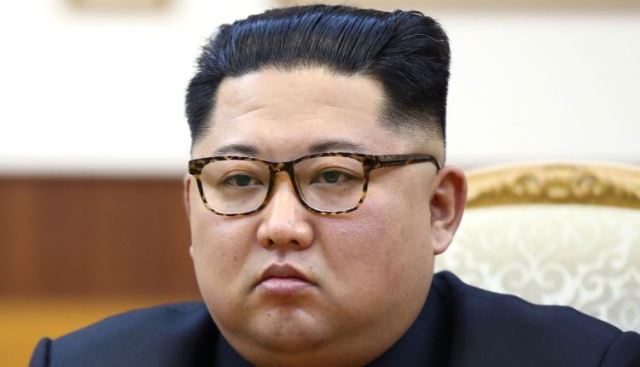 THE North Korean President Kim Jong Un boasted that he could transform Nigeria and Ghana into first world countries if he were allowed to colonise the two countries, according to a news report going viral on the social media.

The report has been shared by over 80, 000 by users, especially Nigerians on various social media platforms, including Facebook, Twitter and WhatsApp — with many users taking the post as the gospel truth.

The 158-word news published by Abia Pulse says Kim described Nigeria and Ghana as the backbone of Africa because “they have all the natural resources in abundance to make them the most important and sought-after countries in the world but corruption is a major problem and a curse to them”.

It quotes the North Korean leader as saying: “Give me just a year and I will transform these two countries into first class countries that will attract businesses all over the world. Nigeria should give in, Ghana should give in and let us colonize them for the second time so they will eventually learn how to run a country.

“These two countries are on a mission of proving to the whites that blacks are only good at crimes and having the power of having long-lasting sex. Sit up Africa, Sit up Ghana and sit up Nigeria or just sell the countries to us.”

The blog post, as though extracted from a press statement, was signed off with the words “North Korean President Kim Jong Un” and the blog additionally stated “Al Jazeeera W/A [West Africa]” as the source of the news. It provided neither information of where nor when the quoted statement was made.

“Nigeria should reason with Kim jong un,” goes one of the many comments on the web page, written by Rabi MK, “because we will never get a good opportunity like this one. So our shameless politicians should sit with guy that is trying to help us out and start the process before 2019 election or if he is ready before the months ends [sic]please. Kim jong, may God bless your heart for helping us sir.”

“I agree with Kim Jong about Nigeria but have my doubts about Ghana,” wrote M.C. Nwafor, to which William Kwasi, a Ghanaian replied: “What do you mean for Ghana you doubt? Are you insinuating Ghanaian leaders are on track and corruption-free? Ghana and Nigeria are all bullshits. We need change. We don’t need partisan politics.”

The post was authored by one Ugochukwu Nwankwo, who describes himself as “an Abia-based seasoned journalist, poet and media consultant of repute and currently the Chairman of Online Media Practitioners Association of Nigeria (OMPAN), Abia State Chapter”.

According to his profile page, “he is also the CEO of Rhino Media, a media aide to the former Governor of Abia State, a human right activist and social critic”.

Unlike most other publications on the website, this particular post, according to statistics on the page, has been viewed up to 256,199 times, has been shared close to 88,000 times, and has garnered 159 comments on the website alone.

A look on the news blog’s Facebook page also reveals that it was shared there up to 65 times, while most other posts were not shared at all or were shared only once.

Fake news from an unverified page

It is true that the report is not the original content of Abia Pulse News and was sourced from “Al Jazeera West Africa”. Al Jazeera, a Qatar-based news network, does not, however, have a West African branch, according to checks by The ICIR. The regions on the organisation’s website include only: Africa, Asia, US & Canada, Latin America, Europe and Asia Pacific.

Search engine tools show that the report is not on any credible news organisation’s website, whether local or international. Sources that have republished include Happy Ghana, Daily Advent Nigeria, Ghana News Aid, among others.

Nevertheless, findings also show that Abia Pulse’s report can be traced to a Facebook page passing off as the West African hub of Al Jazeera, under the name: Al jazeera West Africa. Its about section says: “All the west African News on one portal”.

This page is, however, evidently fraudulent for a number of reasons. First, it is the only page purportedly belonging to Al Jazeera that is not verified as authentic by the Facebook management. Also, the initial “j” in Al Jazeera is spelt in a lower case, as against the norm with other pages.

The page username/URL address, @thewestafricanhub, is also a discrepancy with the name; and posts on the page do not actually link to the authentic Al Jazeera website. They consist mostly of a few poorly constructed paragraphs, a feature image, and dramatic headlines such as: “FBI in full gear to investigate if Nigerian president is a replica”, “RUSSIA PRESIDENT, Vladimir Putin Says: Africa Is A Cemetery For Africans”, and “Robert Mugabe On African Development”.

All three of these reports could not be traced to any trustworthy sources or reputable media organisations and were evidently fabricated by the owners of the Facebook page.

Reviews on the page include one by Ibrahim Mu’azzam Ahmad who warns that the site is fake and unauthentic, and another by Akwasi Ossei Nkrumah who also says it is a fake page and describes its activities as “very shameful”. A long list of similar reviews on the page have not been addressed by the administrator(s).

Further dealing a blow to the authenticity of the speech allegedly made by the North Korean president is the fact that Nigeria and North Korea presently enjoy friendly bilateral relations — a relationship that dates back to 1976. This was confirmed in March when Jong Yong Chol, outgoing Ambassador of the Democratic People’s Republic to Nigeria, praised this Nigerian government’s support for improved North-South relations.

In February, Chol had assured of North Korea’s readiness to partner with Nigeria in ensuring peace and security, at a ceremony held in Abuja in honour of late Korean leader Kim Jong-Il. “We hope to build on the traditional relationship and cooperation between the Federal Republic of Nigeria and Korea,” he had said. “We hope to consolidate and sustain the existing peace and security.”

North Korea is similarly a friendly country in relation to Ghana, not only having an ambassador in the country but exporting cement to and importing cocoa and gemstones from the country. There is also a Korea–Ghana Friendship Association established for the purpose of promoting cultural exchange between both countries.

Similar report was made about Trump

It is not the first time a false report has made the rounds claiming that a head of state recommended that African countries be recolonised.

In October 2015, a report emerged that US President Donald Trump (then a Republican presidential candidate), while in Indianapolis, “expressed his deep disgust for Africans by referring to them as lazy fools only good at eating, lovemaking and thuggery”.

“In my opinion, most of these African countries ought to be recolonized again for another 100 years because they know nothing about leadership and self-governance,” Trump was quoted to have said.

The report, just as the latest one about the North Korean leader, did not provide any context for the quote. The event attended was not mentioned, neither was the date.

Snopes, a reputable fact-checking website, has confirmed the report to be spurious. The Republican candidate was not in Indianapolis at the time of the report and no American political websites reported the statements. Other statements about Africa attributed to Trump around the period were similarly found to be false.

The report is not only suspicious, but it is also untrue and cannot be substantiated by content from credible sources. The existing friendly relations between North Korea, Nigeria, and Ghana also make it unlikely for the Korean leader to make inciting statements credited to him.

When The ICIR contacted Nwankwo, the founder of Abia Pulse, to confirm the source of the blog’s report, he replied that it was obtained from the “website of Al Jazeera”. Asked for the link to this report, he eventually directed our reporter to the misleading Facebook page: Al Jazeera West Africa.

Has President Muhammadu Buhari died and been replaced by an impostor?