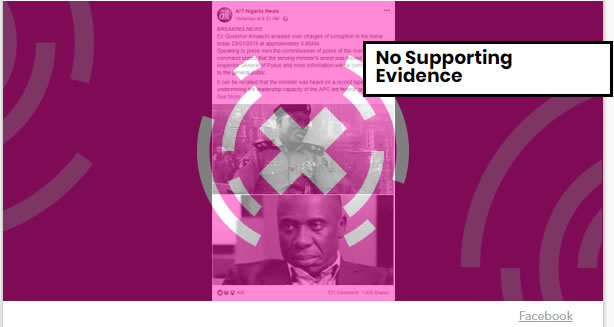 ROTIMI Chibuike Amaechi, minister of transportation and the director-general of the APC presidential campaign organisation was said to have been arrested by the police in his home on Wednesday, January 23 on allegations of corruption.

CrossCheck Nigeria, a collaboration of newsrooms in Nigeria which includes The ICIR, confirms that Amaechi was not arrested and that he was at the presidential rally of President Buhari in both Sokoto and Kebbi states yesterday, January 23.

To verify this, CrossCheck Nigeria tracked the minister’s public appearance on said date. The presidential rally of the APC was in Sokoto and Kebbi on January 23. A NAN report confirmed the APC campaign DG was in attendance. Live coverage of the event by the NTA also showed Amaechi addressing the crowd at the rally.

The police, through the Rivers state commissioner, debunked the claimed and urged the general public to disregard it.

FG and ASUU reps did not engage in a brawl