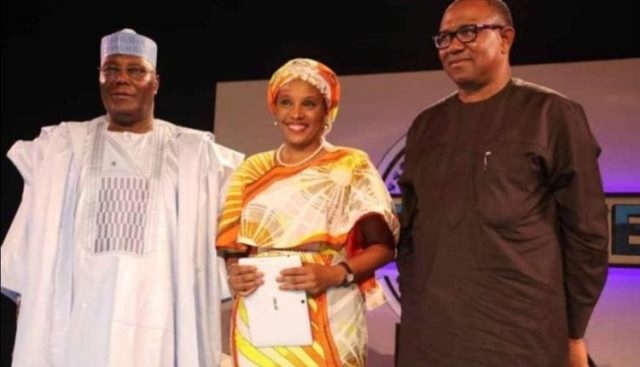 ON Wednesday, the presidential candidate of the People’s Democratic Party (PDP), Atiku Abubakar, and his running mate, Peter Obi, were hosted on The Candidates, a town hall meeting where candidates respond to questions bordering on their capabilities and policies.

It was the programme’s final session, following similar ones in the past where candidates from the Young Progressives Party, Africa Action Congress, and the All Progressives Congress, were also given nearly two hours to share their manifestoes.

In this fact-check, The ICIR takes a look at some of the claims made by Atiku and Obi, and assesses them based on available facts. Meanwhile, it was observed that, following previously published fact-checks, the party’s vice presidential candidate adjusted some of his earlier assertions, which were repeated during the interview.

For instance, during the vice presidential debate organised by the Nigeria Elections Debate Group (NEDG) in December, Obi had mistaken Iraq for Iran as one of two countries below which Nigeria is ranked on the Global Terrorism Index. This error was not made at the recent town hall meeting.

Atiku: Insecurity was restricted to the Northeast when Buhari came in

“When we come to the issue of security, at the time they [APC] came in the security challenge was restricted to the Northeast. Today, it has spread to two other Northern regions: Northwest and North Central. I don’t think that’s a good performance.”

While, under this administration, terrorist attacks and clashes have taken place, it is not true Boko Haram’s violent attacks were restricted to the Northeast prior to Buhari’s presidency. There are many examples of attacks outside the region under the Goodluck Jonathan-led federal government, for instance.

The bombing of the United Nations headquarters in August, 2011 which left 21 dead and 312 injured, took place in Abuja. Four months after this incident, there was a bomb blast at St. Theresa’s Catholic Church in Madalla, Niger State. In January 2012, there was a series of terror attacks in Kano State, that left at least 185 dead, including 29 police officers. There have also been similar attacks in Kogi and Kaduna states within the period.

Data from The Economist, Institute for Security Studies, and the Council on Foreign Relations’ Nigeria Security Tracker also substantiate this, showing also that attacks and death tolls have reduced under the present administration.

Atiku: (On the allegations against his wife), she has neither been indicted nor been charged

“The company was fined for a number of offences committed, not necessarily on the issue of my wife’s account. What I can tell you is that my wife has never been indicted and she has never been charged. So there is no way you can hold my wife accountable. My wife is an American, mark you. There is no way they would not have charged her to court or indicted her.”

In the sense that he used the words, “indicted” and “charged”, it may be inferred that Atiku meant to use the former word in the sense not related to the latter, which is to accuse somebody of wrongdoing. Thus, while it is true that Jennifer Douglas-Abubakar, the former vice president’s fourth wife, has not been charged by the United States of America, it is incorrect to suggest that she has not been directly alleged to have violated the law.

While she was in the US, not only were her financial transactions highly suspicious and inappropriate, many times banks questioned the huge amounts of cash flowing to her from offshore corporations sending her funds and decided to close her accounts. Each time, she would open new ones at other banks with the help of her lawyer, Edward Weidenfeld.

Also, in 2008 the U.S. Securities and Exchange Commission alleged “in a formal complaint against Siemens AG, a German company, that, among other actions, in 2001 and 2002, Siemens wire transferred $2.8 million in bribe payments to a U.S. bank account belonging to Ms. Douglas as part of a scheme to bribe Nigerian officials.” This is according to the 2010 bipartisan report of the U.S. Senate on foreign corruption.

“In response to this and other legal actions, Siemens admitted to engaging in widespread bribery payments, pleaded guilty to criminal violations and settled civil violations of the U.S. Foreign Corrupt Practices Act, and agreed to pay over $1.6 billion in civil and criminal fines,” the report also noted.

“Ms. Douglas has denied any wrongdoing, but the subcommittee has obtained financial records showing the transfer of over $1.7 million from Siemens AG to Ms. Douglas’ account at Citibank.”

Verdict: The claim is misleading.

“We have heard issue of fighting corruption and the noise associated with it, where you took over an economy that was $520 billion with a per capita for every Nigeria of $2,500, and you abandoned about growing the economy and was busy chasing what seemingly does not exist … and you ended up not recovering even $5 billion, and the economy has lost $120 (something) billion, where now every Nigerian per capita is below $2,000. So we have all lost $500 while you are busy not achieving anything.”

Also, Nigeria’s GDP according to the International Monetary Fund (IMF) in 2015 was $494 billion, and not $520 billion. Today, the figure has dropped to $397.5 billion, meaning the country has lost $97 billion in economic output, and not over $120 billion as claimed by Obi.

Verdict: The claim is false. Though the vice presidential candidate is closer to the truth than he was at the NEDG debate in December, his claim about the country’s GDP per capita is still slightly inaccurate.

Atiku: Our agricultural output under PDP was much higher

“Our major plan is to create jobs, and the greatest job creation sector in this county is the agricultural sector … In fact the PDP was doing it better. When we introduced the purchase of fertiliser on your mobile phone. Our agricultural output was much higher than the present administration’s.”

A recent study conducted by The ICIR has shown that agricultural outputs have slightly increased under the present administration. It may be deduced from statistics obtained from the National Bureau of Statistics that, under PDP rule, the average GDP from agriculture was N3.79 trillion, and between 2016 and 2018, the figure rose to N4.19 trillion.

The average percentage of agriculture’s contribution to the country’s aggregate GDP, in relation to other sectors such as industries and services, has also increased from 22.72 per cent to 24.48 per cent.

“Never. Somebody deported from Lagos and I challenged it… I never took beggars to Akwa Ibom. In fact, they are welcome because they are citizens of the state. Do you know my wife is from Akwa Ibom? How can I deport people to their state. People from Akwa Ibom are welcome to my state… I have never in my life discriminated against any human being, and I will never.”

Actually, available reports appear to indicate otherwise. According to a Leadership Newspaper report of December 4, 2011, the Anambra state government, under Peter Obi, issued “a warning to all street beggars, especially children used by their parents to beg for alms, to vacate the streets or be arrested”.

“29 of such women who displayed their children as strategy for getting alms have already been arrested in Awka and Onitsha, and repatriated to their home states; Ebonyi and Akwa Ibom states,” the report added.

Another report by Champion Newspaper cited by PremiumTimes in a 2013 ‘throwback’ quoted the then Director of Child Development at the Ministry of Women Affairs and Social Development, Emeka Ejide, as making similar statements.

Ejide, it reported, said “the Ministry has repatriated more than 29 women begging with children to their various states and would not hesitate to deal with parents who still engage in such acts”. There are no reports of either the Anambra State government or former governor Peter Obi openly denying these reports, until recently.

Verdict: The claim cannot be substantiated using available media reports, and in fact conflicts with such reports.

CJN Walter Onnoghen did not meet with Atiku Abubakar in Dubai