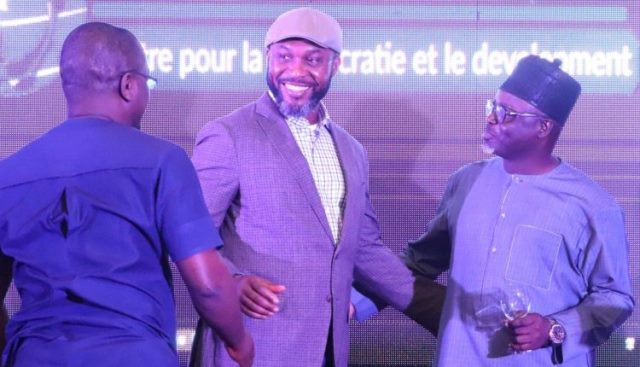 TOP members of the All Progressives Congress (APC), People’s Democratic Party (PDP), and Abundant Nigeria Renewal Party (ANRP) met in Sheraton Hotel, Abuja, on Tuesday to each convince Nigerians their parties possessed the best ideas in bringing lasting peace to the country.

However, not all their claims and arguments, as The ICIR later discovered in a follow-up fact-check, are founded on flawless facts. All three speakers — Lanre Issa-Onilu, APC national publicity secretary, Osita Chidoka, former Aviation Minister representing the PDP, and Tope Fasua, ANRP presidential candidate — committed one factual error or the other.

The event was the first of the Nigerian Political Parties Discussion Series for parties fielding presidential candidates. In this report, The ICIR places the claims of the various parties side by side with available evidence and gives verdicts on their factuality.

APC: Neighbouring countries did not work with previous govt.

Claim: When he started off, Issa-Onilu, who represented the ruling APC, said “the issue of security is one which I always say we shouldn’t play politics with”. But it appears that is exactly what he did when he claimed that the trustworthiness of the Buhari administration, which the PDP-led government lacked, is what has won the country support from neighbouring African countries such as Niger and Cameroon.

He said: “I want to discuss the fact that this government is responsive. This government is taking far-reaching action because if the past government had looked for ways of tackling this issues in a way that will make this peace to be more durable, we will not be where we are today… But this time around, we could see that the most important thing in security is your reputation as a country and the credibility of the government in power … because we cannot tackle security alone without the other countries around you being fully involved.

Checks by The ICIR, however, revealed that it is incorrect to say neighbouring African countries did not collaborate with the previous administration to fight terrorism as there are numerous records showing otherwise.

In July 2014, following attacks outside local borders by the terrorist sect, defence ministers of Nigeria, Cameroon, Chad and Niger met in Niamey and pledged to expedite the creation of a 2,800-strong regional force to tackle.

Months earlier, in March, Nigeria entered into an agreement with France, the Republic of Benin, Cameroon, Chad, and Niger “to increase the level of coordination and exchange of intelligence as well as hold regular meetings of experts with a view to containing the menace.”

And beginning in 2015, before Buhari’s inauguration, the coalition of West African troops launched an offensive against the insurgents, with soldiers from Niger and Chad crossing into Northeastern Nigeria for the operation.

The APC national publicity secretary also said, in the last three years, “there has been massive improvement in the conduct of the police, in terms of them applying the best … that you expect for this kind of environment due to the job they are doing”. The 2016 World Internal Security and Police Index, which ranked Nigeria 127th out of 127 countries, however, gives a lie to this claim.

According to the report, “Nigeria was the worst performing country on the WISPI, with a score of 0.255. Nigeria scored poorly across all four domains [i.e. capacity, process, legitimacy, outcomes], and had the worst score of any country in the Index on the process and outcomes domains. All of its domain scores were in the bottom ten countries.”

PDP: There is no centralised police force as large as Nigeria’s in the world

Claim: Speaking in support of the PDP presidential candidate’s state and community policing policy, Chidoka said Nigeria is the only country in the world that operates a police force having up to 370,000 operatives, which is controlled by only one tier of government.

He said: “Let me correct an impression. The Nigeria Police of 370,000 men is a big organisation. It is a humongous organisation. There is no police force in the world with 370,000 being controlled centrally from one location. I dare anybody to show me that police force.

“What we need to talk about here is fundamentally how do we structure the police to deliver public safety… that is why efforts are being made to ensure that we do not confuse public safety with just having a police force that is sitting in Abuja. We have to face reality, and the reality is that there is no organisation like the Nigeria Police Force anywhere in the world.”

According to the International Criminal Police Organisation (INTERPOL), the Nigeria Police Force has a strength of over 350,000 men and women; and a recent statement by the Inspector General of Police Ibrahim Idris suggests the population is within the range of 320,000.

This means the force is lesser than that of Indian force of 1.93 million, the Chinese force of over 1.6 million (based on a 2007 count), as well as those of the United States, Russia, Indonesia, Mexico, Brazil, Turkey and Pakistan.

According to a 2012 Police Decentralisation Index, the police systems in Russia, which has four tiers of government, operates a centralised force controlled by the top tier. Indonesia and Turkey also operate similarly centralised forces, while Mexico and Brazil have decentralised police organisations.

Chidoka, who is also a former Corps Marshall of the Federal Road Safety Corps (FRSC), equally said during his stint at the corps, they introduced a system of capturing all drivers’ licenses and vehicle number plates in the country “so that when you stop a car on the road, you just type in the number”.

“If you go to nvis.org.ng now, you will type in the car number and you will get the details of that vehicle. The whole idea is that we will invest in technology,” he added.

The ICIR checked the agency’s Number Plate Verification portal to confirm to what extent this claim is true. It was discovered that the information available to the public, after inputing a vehicle’s registration number, is scanty. The portal only states if the number is valid and then vaguely adds the type of car it was assigned to; for instance: “Number Plate is valid and assigned to CAMRY.”

In contradistinction, however, the Lagos State Vehicle Number Plate Verification Portal, launched in 2017, not only displays the model of the vehicle if the number provided is valid, it also states the colour of the car, the chassis number, the vehicle status (whether duly registered by the Motor Vehicle Administration Agency), the issue date, as well as the expiry date.

According to him: “It is not only the budget for security that is low. The budget for even food, for agriculture, for education, for health in Nigeria is low. So as we are speaking about security, remember what is called food security. We have food poverty in Nigeria. 90 million people are food poor in this country, in a country of abundance; and that is why we came with Abundant Nigeria Renewal Party.”

The ICIR has, however, not been able to find corroborating evidence for this figure. According to the Food and Agriculture Organisation (FAO), as of 2016, 13 million Nigerians suffered from hunger.

Also, according to the 2018 State of Food Security and Nutrition in the World prepared by FAO, as at 2017, the prevalence of undernourishment (the traditional FAO indicator used to monitor hunger at the global and regional level) in the total population is 11.5 per cent (21.5 million people) and the prevalence of severe food insecurity is 24.8 per cent (46.1 million people) — none as high as the figure cited by the ANRP candidate.

On the high side is a figure given in 2015 by Idiat Amusu, head of department, Food/Agriculture Technology at the Yaba College of Technology, Lagos. According to her estimates, “about 60 million Nigerians go to bed hungry”.

Verdict: The claim is grossly exaggerated and contradicts figures from reliable sources.

Also, speaking within the context of jobs and youth employment, Fasua seemed to suggest that over 80 per cent of young Nigerians are without jobs.

“A lot of internal security has to do with youth unemployment and youth poverty,” he said. “When young people under 18 years old are not under any kind of direction and no one cares for them. More than 80 per cent of them in this country are kind of ruderless. So, what happens is that if the country does not put jobs in the hands of our youth, the devil is going to put jobs in their hands.”

Verdict: The claim is vague and misleading, but also exaggerated if it was intended to refer to youth unemployment rates in the country.

Tope Fasua picks hole in ICIR fact-check, calls it ‘nonsense, nasty reporting’ — but he is incorrect