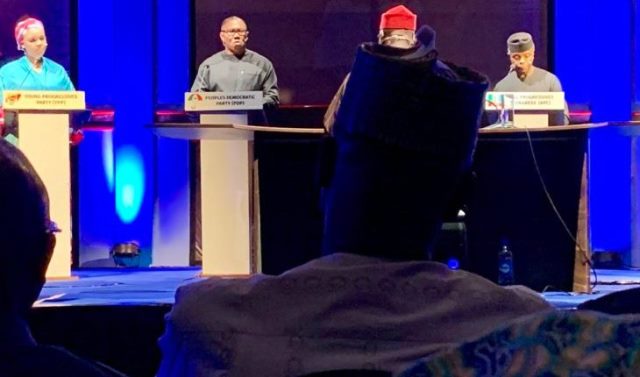 PETER Obi, vice-presidential candidate of the Peoples Democratic Party (PDP has claimed that the unemployment and underemployment rate in Nigeria rose from 24 per cent in 2015 to 40 per cent in 2018.

Obi made the claim at the just concluded vice presidential candidate debate organised by the Nigeria Elections Debate Group (NEDG) and the Broadcasting Organisations of Nigeria (BON).

His goal is to make the economic policy of Buhari look worse than bad.

“In 2015, unemployment and underemployment rate used to be 24 per cent, but now, it is about 40 per cent” Obi claimed

To verify the claim, The ICIR looked through data and reports published by the National Bureau of Statistics (NBS) on unemployment and labour.

The labour force population covers all persons aged 15 to 64 years who are willing and able to work
regardless of whether they have a job or not. The definition of unemployment, therefore, covers persons (aged 15–64) who during the reference period were currently available for work, actively seeking for work but were without work. Underemployment, however, occurs if one work less than full-time hours, which is 40 hours, but work at least 20 hours on average a week and /or if you work full time but are engaged in an activity that underutilizes your skills, time and educational qualifications.

UNEMPLOYMENT AND UNDEREMPLOYMENT RATE FIGURES FROM 2015 TO 2017

Data obtained from a report titled “Unemployment/underemployment report Q3 2016″ from the website of the NBS shows that Nigeria’s unemployment and underemployment rate in Q1 2015 was 29.1 per cent, it increased to 35.2 per cent at the last quarter of 2016.

Obi’s claim is correct on one side and not correct on the other side. He said that “Unemployment rate used to be 24 per cent in 2015, but now, it is about 40 per cent”. Available official records support his claim for 2017 figure. However, the rate was slightly higher than he claimed it to be in 2015; the rate was 29.1 per cent. Therefore, Buhari should not be held accountable for 5.1 per cent loss of job

The unemployment and underemployment rate in Nigeria kept increasing since 2015, it has RISEN to 40 per cent as claimed by Obi.

Tope Fasua picks hole in ICIR fact-check, calls it ‘nonsense, nasty reporting’ — but he is incorrect