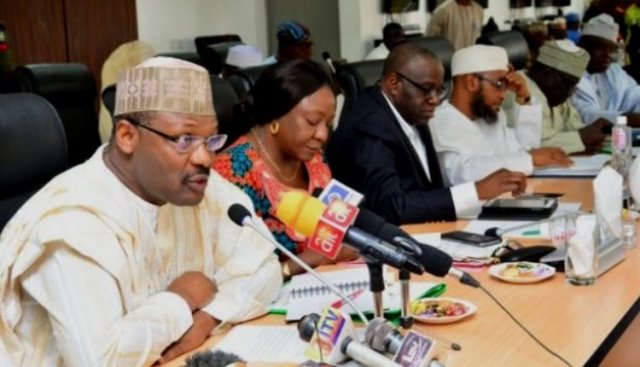 WHETHER or not the Independent National Electoral Commission, INEC, made use of a central server in storing poll results for the 2019 general election has recently been a subject of heated controversy.

In a petition sent to the presidential election tribunal in March, the People’s Democratic Party (PDP) claimed its candidate, Atiku Abubakar, defeated Muhammadu Buhari, candidate of the ruling party, by 1.6 million votes. This information, the party said, was retrieved from the electoral commission’s server, which has the authentic results.

INEC, however, replied that the numbers peddled by the PDP were fabricated and said it did not adopt electronic transmission of collation of results.

Atiku, in April, gave the tribunal what he called the “unique MAC address and Microsoft product ID of the INEC server”.

“The figures and votes were transmitted to the first Respondent’s Presidential Result’s Server 1 and thereafter aggregated in INEC_PRES_RSLT_SRV2019, whose Physical Address or unique Mac Address is 94-57-A5-DC-64-B9 with Microsoft Product ID 00252-7000000000-AA535,” he said.

“The 1st Respondent specifically denies the existence of electronic transmission of results as it is unknown to the Electoral Act, 2010 (as amended) and Regulations and Guidelines for the conduct of the elections, 2019,” it said in its response.

Following an application to the tribunal by the PDP for an order compelling INEC to grant access to the server, the agency maintained that it does not have any server.

“They are asking us to bring something we do not have,” Yunus Usman, its lawyer, said, though this position contradicts statements made before the election by INEC’s commissioners.

Claims have been circulated suggesting that INEC spent “millions of naira” on a server. In this fact-check, The ICIR takes a look at documents drafted by the commission itself, which confirm that it intended to procure various servers for the 2019 election and that, in fact, it got funded for those procurements.

President Buhari had, in July and September, written to the National Assembly requesting for N242 billion as virement and supplementary budget to fund the 2019 general election. Out of this amount, N189 billion was allocated to INEC while the rest went to the Nigeria Police, Civil Defence, and other security agencies.

The Senate Committee on Appropriations on the Virement Request headed by Muhammed Danjuma Goje, in its interim report, recommended that N144.7 billion be transferred from the Special Intervention Programme recurrent budget and N44.2 billion from the programme’s capital budget.

Adding this to the N45 billion recurrent expenses already approved for INEC in the 2018 budget, it meant INEC’s total budget for 2018 was N234.5 billion.

In October, the National Assembly approved the N242 billion supplementary budget as sent by the president—only changing the source of the funding from the legislators’ special projects votes to the Special Intervention Programme.

Does the supplementary budget provide for servers?

Yes, it does. INEC’s supplementary budget was made public by the Policy and Legal Advocacy Centre (PLAC), a nonprofit committed to facilitating legislative advocacy and access to public policies.

According to the document (archived here), INEC proposed to spend N143.5 billion on 209 items. Out of that amount, N2.27 billion was budgeted for server-related procurement items, with budget code 230808. The purpose of a computer server is simply to store, retrieve, and send information to other computers connected to a network.

N1.37 billion was budgeted for nationwide replacement of servers for 25 states and National Data Centre, N99.7 million for an upgrade of the server version of OpenVR for compatibility with new Dell server, and N800 million for the migration of voter registration database from MySQL Open Source to OracleDB (both database administration services).

INEC also budgeted N157.5 million for the renewal and maintenance of cloud infrastructure, with budget code 230709.

Though the National Assembly sub-committees on INEC and electoral matters, headed by Suleiman Nazif and Aishatu Dukku, recommended the reduction of the some of the proposed amounts, the proposed budget was eventually passed in full.

Not only was the approval absolute, but the office of the Accountant-General reports in its “Capital Performance of the Budget” document that all of the amount (N188.9 billion) was released to INEC and spent by it.

It is worth mentioning that the word server is likewise used four times in INEC’s “2017-2021 Strategic Programme of Action” (archived here).

According to the plan, the agency’s ICT department was expected to award contracts by the first quarter of each year for the upgrade of existing mail server and expansion of INEC mail system to states and local government offices.

The department was to get approval by the second quarter of 2017 and 2018 for the procurement of servers for all 36 states and the Federal Capital Territory. It was also to upgrade the server version of Open VR for compatibility with the new Dell Server.

The renewal and maintenance of cloud infrastructure as well as the development of data management tools “for archiving election results and other electoral activities” were also provided for in the programme of action.

It is true that money (over N2 billion naira) for the procurement and upgrade of servers was approved for INEC by the National Assembly and it has had a longterm plan favouring the electronic storage of electoral results.

The amount was also released to INEC and the commission reported it as utilised. If the agency insists it does not have a server, then it has some explaining to do on how exactly it spent the relevant funds.

NYSC says it’s at ‘forefront’ of total compliance with FOI Act, but it’s not true