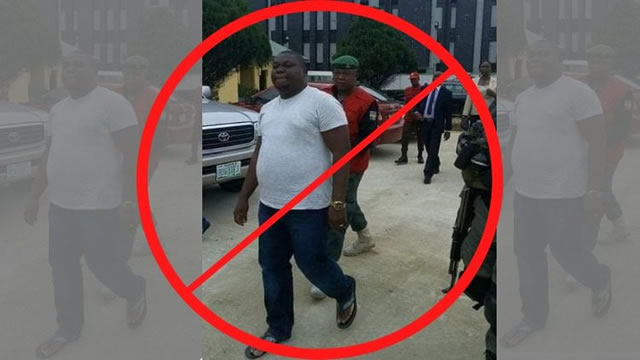 A REPORT which claims that the South-South zonal head of Nigeria’s anti-graft agency, the Economic and Financial Crimes Commission (EFCC), Ishaq Salihu, addressed a group of protesters in its Port-Harcourt office, Rivers state recently over the trial of George Turnah has started spreading like wildfire on WhatsApp.

Turnah, a lawyer, is an aide to a former managing director of the Niger Delta Development Commission (NDDC), Bassey Dan-Abia.

The report, shared on WhatsApp on Tuesday, June 2, and published by a few online news platforms in Nigeria, was titled: “Youths in Niger Delta protest EFCC arrest but were shocked to hear…”

The report claimed that youths stormed EFCC’s South-South office in Port Harcourt, Rivers State, “describing Turnah’s arrest as an act of injustice, saying he is a good man with a good heart. They stayed there demanding his unconditional release. The EFCC South-South Zonal head, Ishaq Salihu, instead of pushing away the protesters, called them together and began to educate them.”

It added:  “If I tell you all how this young man has contributed to the underdevelopment of your region, you will be ashamed to be here…

“Next time, before you join this kind of protest, ask yourself what his source of income is as compared to his flamboyant life. I will leave your conscience to communicate with you.”

The report further noted that “Immediately the EFCC South-South head ended his speech, the protesters were all cold, they could not utter a word again, one by one, they started dropping their placards, and before you know it, even his close associates who were all there, were shocked at the revelations, they too threw away their placards, everybody went back home.”

Verification of the claims by The ICIR shows that George Turnah was neither rearrested by the EFCC nor was there any recent protest by any Niger Delta youth group on his case with the anti-graft commission.

EFCC spokesman, Dele Oyewale, confirmed this in a text message to The ICIR Nigeria on Tuesday.

“We are still in court against George Turnah. His trial started in 2016. He was never re-arrested, please. Thanks,” Oyewale stated.

Also, several Google searches revealed that the claim is at least three years old as the exact content of the report was first posted online on Nairaland, a popular Nigerian blog, on June 1, 2017, and subsequently published word for word on several online websites including Thenigerialawyer.com, Echonigeria.com and blogs such as Ajisamvoice.blogspot.com .

Facebook pages such as Daily Crime Reporters and InfotrackNaija had also shared the same report in the last four days. An online news platform, Observertimes.com, also posted the same report as an exclusive on its website on June 1, 2020.

Findings by The ICIR indicated that several protests were held between May and July 2017 regarding Mr. Turnah’s case, but no mainstream media reported that EFCC’s Salihu addressed any group of protesters during the period.

According to an EFCC release of May 26, 2017, some protesters, under the aegis of Niger Delta Volunteer Services Scheme, and Celtic Pride and Event Limited (employees of Turnah), visited EFCC office in Port Harcourt, on that day but they were not addressed by EFCC zonal head, Mr.Salihu.

Rather, the press release said that “the protesters were received by Mrs.Akpos Ekisowei of the Public Affairs Department on behalf of the EFCC, who promised to convey their message to the appropriate authorities.”

The Punch newspaper’s report of July 1, 2017, also confirmed another protest by youth groups “from nine states of the Niger Delta” who visited the zonal office of the EFCC in Port-Harcourt on Friday, June 30, 2017. However, the newspaper only reported that an unnamed “top officer of the EFCC, promised the protesters that the commission would ensure justice was made in the matter.”

Our findings also revealed that a picture of Mr. Turnah’s arrest which has been circulating online since about four days ago, especially on Twitter and Facebook, alongside the report, first emerged online early 2017 when he was first arrested by the EFCC. The same picture reposted on May 31, 2020 by one Twitter account user, @Gen_Buhari, had over 1,000 likes and over 1,100 retweets as at Wednesday noon.
A call to Mr. Turnah’s mobile phone number by The ICIR to verify if he was rearrested was not connecting as his line was unreachable at the time of filing this report.

The resurfacing of a 2017 post might be connected to a current controversy over financial mismanagement at the NDDC, which has led to an investigation by Nigeria’s National Assembly.

It will be recalled that the Interim Management Committee (IMC) of NDDC headed by its acting Managing Director, Kemebradikumo Pondei, and the Executive Director of Projects, Cairo Ojougboh, had recently engaged Nigerian lawmakers in a brawl of accusation and counter-accusation.

While the lawmakers accused the IMC of alleged financial misappropriation, the commission had accused members of the Nigerian parliament of allegedly padding the 2019 budget of the NDDC.

The Senate and House of Representatives had on May 5, 2020, resolved to investigate how the IMC of the NDDC allegedly squandered N40 billion within three months and thereafter set up an adhoc committee headed by Senator Olubunmi Adetunbi (APC, Ekiti North) to look into financial transactions carried out by the IMC on behalf of the commission within the period and present a report this June.

But the NDDC management, who has since denied the allegation, however, accused Senators and members of the House of Representatives of allegedly inserting over 500 projects into the 2019 budget of the commission and were arm-twisting the Interim Management Committee (IMC) from carrying out a forensic audit as directed by President Buhari. Mr Ojougboh also said the House of Representatives “vandalized and raped” the 2019 budget by adding ₦85 billion to the budget.

The ICIR reports that the forensic audit of the NDDC was ordered by President Muhammadu Buhari in October 2019, following alleged corruption by the interim management.

A statement by the Special Adviser (Media and Publicity) to President Buhari, Femi Adesina, said the president gave the directive after receiving governors of the states that make up the NCDC, led by Governor Seriake Dickson of Bayelsa State. The president had said what was presently on ground in the South-South region did not justify the huge resources that had been made available to the agency.

There is no evidence to support the claim that Mr. George Turnah was recently rearrested by the EFCC. Similarly, there was no recent protest by any Niger Delta youth group regarding his case with the anti-graft commission, which is already before the Federal High Court, Port Harcourt.

With 55 per cent slash in Education, 42 percent in Health, Executive undercuts development priorities

Is United Nations creating a new country out of Nigeria, Cameroon?